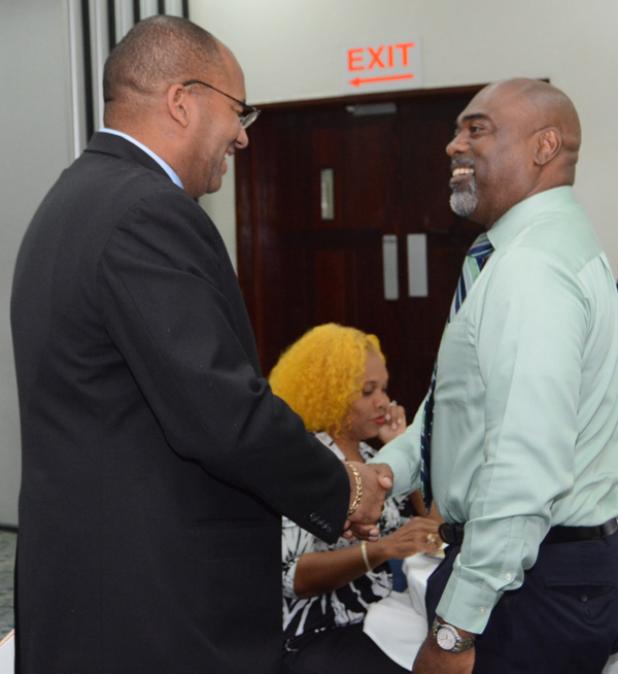 Richard Sealy, Minister of Tourism and International Transport, greeting BHTA CEO, Rudy Grant, prior to the start of the review of the Tourism sector press conference at the Lloyd Erskine Sandiford Centre yesterday.

Some of the tourism executives present during the press conference yesterday.

BARBADOS is on course for full employment with a number of new jobs being created from the several tourism-related construction projects which are to come on stream.

Minister of Tourism and International Transport, Richard Sealy, told his annual news conference yesterday at the Lloyd Erskine Sandiford Conference Centre, that the aim is to have over
14 000 jobs created over the next three years with the start-up of the projects.

He explained that full employment does not mean zero unemployment, but rather employment for those who are seeking jobs.

“I don’t want anyone to suggest that we want to take unemployment to zero per cent. We can come close to full employment and I am trying to get the team at the Ministry of Tourism to aim for that goal,” Sealy told the function, which was attended by several stakeholders in the industry. He said that it can be done, even if it is off a bit.

“We have to embrace change, which is necessary in order to make progress,” according to Sealy.

The Minister said that Barbados’ unemployment rate is just over 10 per cent, and it is projected that the numbers will be under 10 per cent by year-end. Currently, approximately 15 000 people are looking for work out of a workforce of about 147 000 persons.

At the moment, 700 persons are employed on the Sandals project at Maxwell, Christ Church, and there are plans to ramp that up to 1 000 as that project nears completion.

As for the $240 million Sam Lord’s Castle redevelopment programme, the Minister said that 1 100 persons will be employed on the site. Government, he explained, is facilitating the project, “which is the largest of its kind we have ever done”.

A further 500 will find work at the Hyatt, while Almond Beaches’ scheduled to start by April 2018, and the Four Seasons, will contribute towards the goal of full employment.

Sealy said that Government will remain a facilitator, and that it will not be getting involved in the management of hotels. To this end, he assured that Sam Lord’s Castle will not be another Hotel and Resorts Limited (HRL), and that they will be looking to Wyndham Hotels taking charge once Sam Lord’s is up and running.

He also made the point that Government only got involved with the Almond Beach Hotel in St. Peter because the Barbados private sector showed no interest in the property when Massy Holdings Limited decided to sell it.

Sealy did not say much about Four Seasons, except that there are some individuals who have shown an interest in the project. Negotiations, he added, are at an advanced stage. (JB)