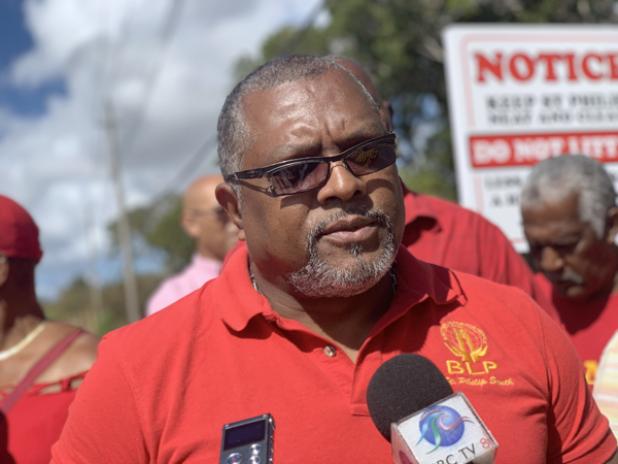 St. Philip South MP, Indar Weir as he made his remarks.

Minister Weir: I am not happy

St. Philip South MP, Indar Weir is not happy with the fact that people are not taking responsibility for cleaning up their surroundings and believes that people should be held accountable.

Weir expressed this to media during an interview that took place on the sidelines of a St. Philip community project that was launched yesterday morning.

“I am not happy with the fact that people own land in Barbados and are not taking full responsibility for cleaning,” he said.

The Minister was quick to add that he was not one to point a finger at anyone as he was not always disciplined in this regard, however he believed that the time had come for Barbadians to start taking responsibility for their surroundings.

“This is a problem that we have in Barbados, where people think it is okay for them to have a house spot and not take the responsibility for cleaning it and so good members of the community, like the ones we have here, have to go out and take that responsibility at their own cost and put in their own labour. It’s not fair!” he said.

“We are committed to the community so we are going to do it but at the same time we must find a way to hold people responsible and I say that against the grain of everything because I don’t think its right for people to own land and not keep it clean.”

The Minister revealed that the constituency started a de-bushing programme a couple of weeks ago, and noted that they planned to target all eight polling districts in St. Philip. He was of the view that Government could only go so far, and believed it was their responsibility to allow people to participate in activities such as the de-bushing programme as it would develop a sense of responsibility in people from the community.

“So this programme is one that is seeking to keep St. Philip South clean, St. Philip clean and help to create a safe environment for the people. I am indeed happy that the branch has taken the lead in this and I intend to lend my full support,” he said.