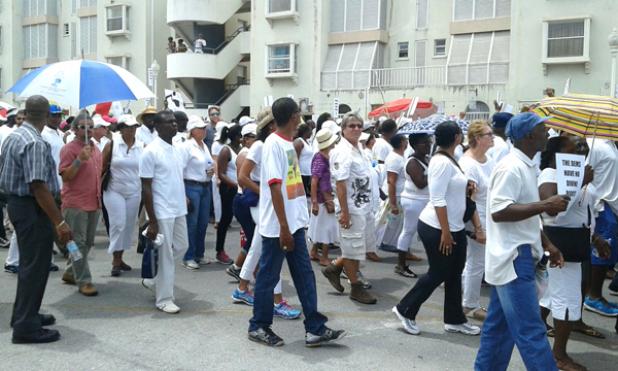 Some people took the opportunity to take shade from the hot sun.

Mia to DLP Government: We are watching you

A phrase used repeatedly by Opposition Leader Mia Mottley as she addressed the large crowd that converged in the Browne’s beach car park at the end of the Walk for justice which concluded just after 1 p.m.
Saying that the country is broken and is in need of healing, she recalled that the Walk back in July 2014 against the Municipal Solid Waste tax which she described as “disproportionate and unconscionable”, ultimately led to Government repealing that tax. “It showed us that the power of the people is stronger than the people in power.”
Mottley also suggested that it was the strong voice of the people that led to the proposed Cahill project being abandoned.
She told the crowd, “I ask you that as we gather here, we are not here today to bring down a government, we are here today to send the message that the power of the people is stronger than the people in power. And we recognise that all great struggles have taken time, but what this government that sits today as we speak in Bay Street must know is that we the people are watching.”’
“Every decision that this government from now on, every Bill that is passed, every contract that is awarded, every project that is started without planning permission, every salary increase that is given, must be watched, monitored and responded by the people of this country because the power of the people is stronger than the people in power.”’
“We have come here with a simple message. We are watching you. And I say to the members of the BLP a new day is dawning because we too, whenever the people elect us to government will be kept in check by the power of the people. You cannot educate a people and ignore the voice and the will of the people,” she said.
Mottley told the gathering that the steps being taken by the Opposition will not be an overnight struggle, neither is it about elections. “This is not about a victory for the BLP. This is about a movement for people power. And we in the Labour Party will be as subjected to it as this government. Because in this year, our 50th anniversary as a nation, Independence will only feel something for people if people can experience freedom and justice. If they cant – then we have a duty to make it happen.”
“We have launched a Covenant of Hope, because without hope there is no future. And we believe that better can come. But we know that we cannot do it alone. And we know that the platform for people power... the movement of people power, the understanding of the importance of conscience in this country, is what will not only make us a better people but will allow us to build our economy and to put money in people’s pockets again. Together we shall work. Together we shall succeed. Together we will be craftsmen of our fate, not spectators,” she said. (JH)