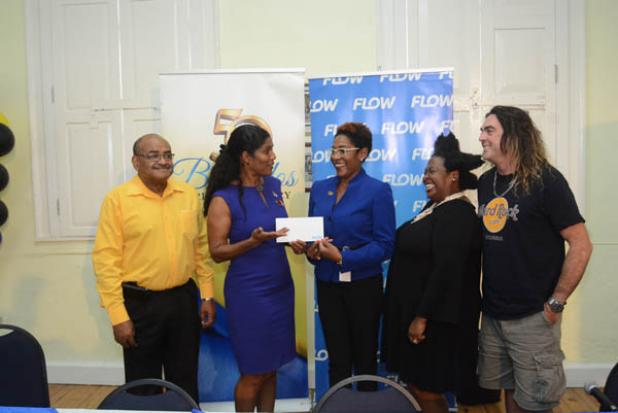 Fri, 11/11/2016 - 12:00am
The upcoming Golden Anniversary Spectacular Mega Concert is well within the organising committee’s budget.
Deputy Chairman of 50th Anniversary of Independence Celebrations Coordinating Committee, Senator Dr. Esther Byer-Suckoo disclosed this while addressing the event’s launch on Wednesday at Main Guard, The Garrison.
“I am happy to report that this Mega Concert is within the budget set for the 50th Anniversary of Independence celebrations. The Secretariat is happy to partner with FLOW which generously offered to be the major sponsor for this event. I must also inform you that some of the artistes have offered their performances as gifts to the nation on this occasion.”
The Labour Minister also told the gathering that the Concert, which will climax Barbados’ 50th anniversary of Independence celebrations, will give locals and visitors “an opportunity not only for merriment, but also to reflect on our past with hope for our future. The cultural offerings of the evening are designed to bring feelings of nostalgia, while at the same time, celebrate our present.”
The November 30 show will be held at the historic Garrison Savannah from 8 pm until midnight. It will feature four big bands and it be divided into three major segment highlighting music and culture from the 1960s to 1980, 1980 to 1990 and 1990s to the present.
As further pointed out by the Deputy Chairman, it “will be a brilliant review of the last 50 years of Barbadian culture. The cast will include over 500 persons.”  She added it “will highlight iconic Barbadian moments, sights and sounds of the last 50 years, from 1966 to 2016. This will be done through the fusing of video narratives and cultural performances that will cover all genres of Barbadian music including spouge, gospel, folk, calypso, jazz and other elements of our culture.” (MG)