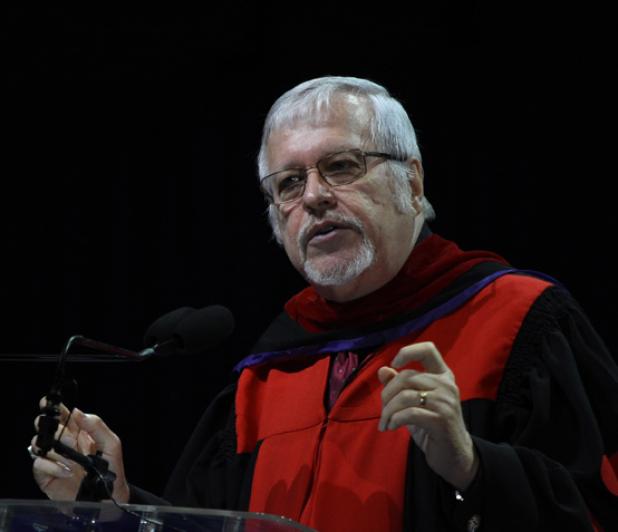 Bishop Dr. Gerry Seale of the Pentecostal Assemblies of the West Indies delivering the sermon at the National Independence Service of Thanksgiving, yesterday.

This year’s National Independence Service of Thanksgiving, one of the highlights of the country’s 53rd Anniversary of Independence celebrations, brought together Barbadians from all walks of life to the Garfield Sobers Sports Complex, yesterday.
Reflecting on the theme “One Nation, One Love, One Light,” Bishop Dr. Gerry Seale of the Pentecostal Assemblies of the West Indies said that 68 years after Universal Adult Suffrage and 53 years into sovereignty as an independent nation, “We are many steps closer to being – one nation, one people, Barbadians. With many steps still to go.”
Recalling experiences, he declared that in 2019 Barbados, race still matters.

“Having served on the Committee for National Reconciliation and subsequently on the Task Force on Reparations, I am well aware that our society has spread of an air of tranquillity over the issues surrounding race, but we are one nation, and sooner rather than later, we need to resolve these issues as one nation,” he stressed.

“In this new life, it doesn’t matter if you are a Jew or a Gentile, circumcised or uncircumcised, barbaric, uncivilised, slave or free – Christ is all that matters and he lives in all of us.”
Addressing the congregation which included Governor General Dame Sandra Mason; Prime Minister Mia Amor Mottley, Chief Justice Sir Marston Gibson, members of Cabinet and other dignitaries, Bishop Seale emphasised that the one love that binds us is not sex, family or friends, “But, that love that flows from the Father through the Son and that is implanted with us by the Holy Spirit.”

Acknowledging that the church is being asked to express its opinion or lend a helping hand in some way, the Bishop made it clear that the church is far more than an institution. He said that it is a “vital living organism that infects every area of society from the cabinet, to the senate, to every department in the civil service into the business sector, into our military, in our homes”.

“The organism is made up of those of us who are believers in Christ, daily living out the principles of Christianity.”

Furthermore, Bishop Seale expressed that every child that enters this world has within him or her gifts given by our creator, that leads to a purpose and a destiny, “None of us are here by accident; none of us is a mistake regardless of what we may have been told by those who know better – we each have a purpose, a destiny and its in living out that destiny that we bring a light into the darkness of realities. Light that dispels that darkness, light that reveals the path before us and guides us to the greatest good.”

During the service, The Rev. Dr. Michael Clarke led the Liturgy of Light during which the youth and centenarians played important roles, lighting the official national candle and reciting the national pledge.

Also, there were musical performances by the Band of the Royal Barbados Police Force, the National Independence Service Mass Choir – the Moramus Singers, the choir of St. Patrick’s Roman Catholic Cathedral and the Royal Diadems.