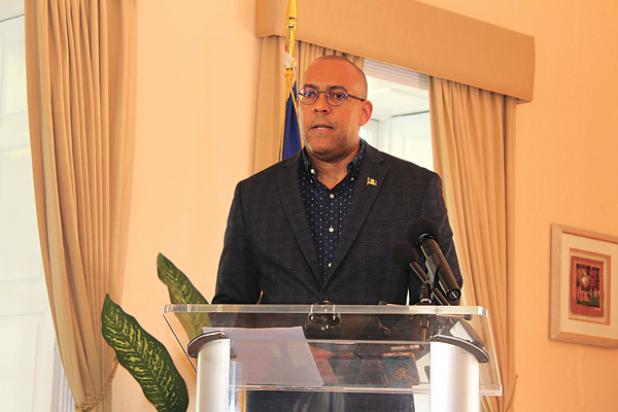 Minister of Tourism and International Transport, Kerrie Symmonds speaking to the media on Sunday at Ilaro Court.

Barbados’ tourism sector has been impacted in a major way since last Thursday’s announcement of the mandatory 14-day quarantine of visitors to the island from the United States of America, the United Kingdom and Europe.

Minister of Tourism and International Transport, Kerrie Symmonds said the impact has been three-fold. He told journalists this while addressing a press briefing at Ilaro Court yesterday, where he spoke about the impact COVID-19 has had on the sector.

One outcome from the announcement he said, was “a dramatic escalation in the level of cancellations which were being recorded both in the airline industry and across the accommodation sector”. As a consequence of this, Symmonds further stated, “we saw an equally dramatic decline in the loads which airlines servicing us commercially were carrying and, quite frankly, some of the figures which were being recorded began to show that it would be commercially unviable to sustain a number of routes”.

He continued, “almost at the same time that happened, travel advisories were issued by some of our major source markets indicating to their nationals that they ought not to travel anywhere in the world. So for example, the United Kingdom Foreign and Commonwealth Office would have issued a travel advisory urging all British nationals to stay home. The European Union has issued a European Union-wide travel advisory, the Canadian government has done the same thing and, of course, you know the United States of America has done the same thing.”

Giving details by market, he said Barbados is serviced from Europe by two airlines – Lufthansa’s Eurowings and Condor. The former carrier, which winter contract was originally to come to an end in the middle of April, on Monday will suspend “its operations into Barbados for the rest of winter”. Meanwhile, Condor has “suspended their operations indefinitely as of Friday”. Both airlines presently are focusing primarily on the repatriation of their passengers.

As it relates to the Caribbean and Latin America, the Tourism Minister said Barbados is serviced by LIAT, Air Antilles, Caribbean Airlines and Copa Airlines. In relation to LIAT, he said “the situation is very fluid” as CARICOM states are “taking decision with respect to their own borders”.

He however shared his hope “that shareholder governments will be as faithful as possible to the determination made by the Board very recently to the effect that reduced and revised schedules should, where possible, be maintained and that is obviously because of the fact that we anticipate the need for a number of various forms of assistance to be offered from Barbados to the rest of the CARICOM region”.

Caribbean Airlines will be suspending its service on Monday while Copa Airlines’ service from Panama was suspended on Friday until the situation in that country and Barbados improves. Government will have talks with Trinidad and Tobago about the position of Caribbean Airlines.

Symmonds said the United Kingdom is serviced by Virgin Atlantic and British Airways. The former airline will suspend its operations to Barbados on Monday. However, “there will be a 747 servicing the country today [Sunday], again tomorrow [Monday] with regard to repatriation”.

He added British Airways will continue to fly to Barbados until March 26th. He further said this airline and Virgin has entered into “a cooperative arrangement with Barbados”. Persons who were unable to leave on Virgin’s flights before its service ended, they should be able to do so on British Airways.

Symmonds additionally said “the situation with British Airways is very fluid” and his ministry will meet with the airline’s head of network planning with “the desirability of maintaining at least a once weekly flight between the United Kingdom and Barbados because of the very important issues of being able to freight into this country medical supplies, food and other supplies which are necessary”.

Speaking about America, he said Barbados is serviced by American Airlines and JetBlue. American Airlines has suspended operations from Sunday, March 22 through Wednesday, March 25th and will resume on Thursday, March 26th. The aircraft will then continue to fly twice weekly from Miami, Florida and once weekly from Charlotte, North Carolina, until April 1st. He said this will allow the airline to repatriate its passengers and Barbados to maintain connectivity with America.

JetBlue on the other hand suspended operations on Saturday, March 21st, but will continue weekly to have a flight from New York on Saturdays for “an indefinite period of time”. If there is a demand, that could increase to twice weekly.

As it relates to Canada, Barbados is serviced by WestJet and Air Canada. Symmonds said the former carrier ceased its global operations on Saturday. Meanwhile, Air Canada is bringing their operations to a halt globally on March 31st. There will be flights to Toronto until that time. Symmonds said after this, discussions are to occur to have a once or twice weekly flight from Barbados to Toronto.

The Barbados/Montreal flight was suspended from Saturday. (MG)