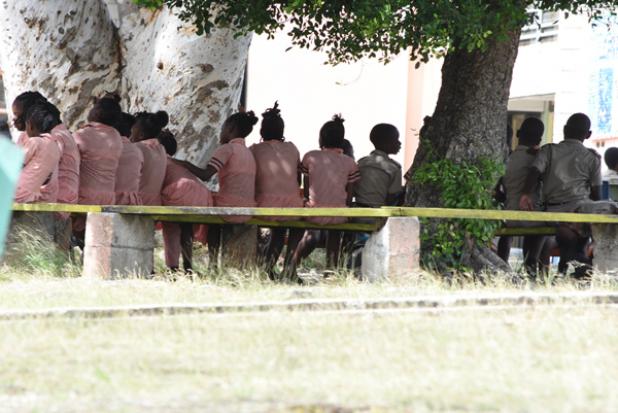 LT Gay students have classes outside

Classes at the Lawrence T. Gay Memorial Primary School were held under the trees around the compound yesterday as teachers and students stayed away from the classrooms.

The problem is a long-standing one, as last term, the educational institution was closed for several days after teachers and students complained of a noxious odour, which left them feeling unwell.

In December, the absence of ten teachers, who were on certified sick-leave, also led to parents being called to pick up their children early due to the lack of staff.

In 2016, the school was closed for months and students were temporarily relocated to the Grace Hill Moravian Church in Spooner’s Hill, the Breath of Life Seventh-day Adventist Church in White Hall and the Sarah Ann Gill Methodist Church in Fairfield to allow for industrial cleaning of the classrooms.

During that time, tests were conducted by the Environmental Protection Department due to repeated complaints of teachers and students coming down with rashes, sore throat, and itchy eyes and skin.

However, one parent told The Barbados Advocate yesterday that it may be time to consider a permanent solution.

“There is no information coming forward as to what is wrong with the school. I can’t be productive at work because as I get there, there is a call to ‘come for your child’. The Ministry needs to do better. It can’t continue to go on like this because if children and teachers getting sick all the time, move them!” the irate caregiver stressed.

Senior officials at the school directed members of the media to speak to the Ministry for official comment.

In the meantime, an ‘extraordinary’ meeting has been called by the school’s PTA Association for Thursday evening to discuss the recurring health and environmental concerns at the school and the frequency of the early closures of the school and the impact on students and parents.