Though sometimes overwhelmed with emotions, Ruth Quintyne thanked everyone who played a part in supporting her. 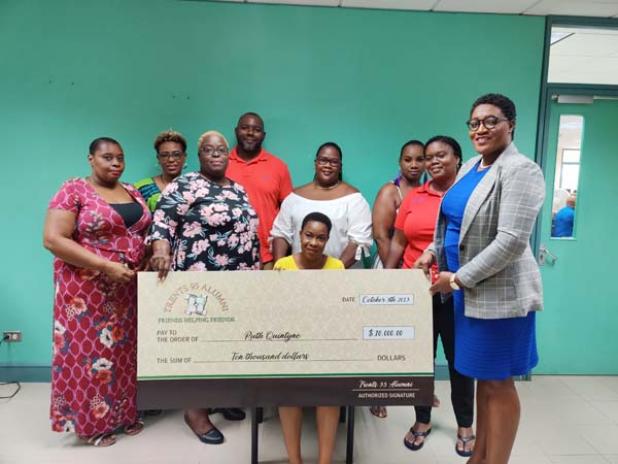 Ruth Quintyne (seated) accepts a cheque of $10 000 from her former schoolmates, the Trents 95 Alumni, who raised the money to assist with her medication and treatment for Multiple Myeloma Cancer.

Yesterday, with tears in her eyes, Ruth Quintyne accepted a cheque of $10 000 from her former schoolmates, the Trents 95 Alumni. The money was raised to assist with treatment and medi-cation for Multiple Myeloma Cancer with which she suffers.

The emotional handover of the cheque, raised from proceeds of the “Fighting For Ruth Fish Fry” and donations, took place at the Ministry of Labour and Social Partnership Relations Conference Room, in Warrens. Surrounded by her closest classmates from back in 1995 at the St. James Secondary School, affectionately known as Trents, Quintyne was overwhelmed by the support given to her during this trying time and thanked God first.

“First I want to thank God for allowing me to be here. It has been a challenging year mentally and only through His grace and mercy that I am here today and I am overwhelmed.”

With her eyes passing over each member of the Trents 95 Alumni present, Quintyne expressed her thanks for their help in her time of need.

“I want to thank the Trents Alumni, my schoolmates. It warms my heart to see that you guys stepped out for me. I am deeply grateful, a heartfelt thank you. I see the hard work that you guys put in. I know that challenges that you had and I am sincerely grateful from the bottom of my heart, to each and every one of you.”

Not forgetting the Abundant Life Assembly, Quintyne thanked the Pastor and members, along with the patrons of the fish fry for their support and donations. The gratitude continued as she finally thanked her family and friends for being present during her down moments, especially mentally over the last year.

It was just over a year ago when the cancer was diagnosed. Seeking advice about a pain in her hip, it was found that not only was her hip broken and she needed a hip replacement, but subsequently that the cancer was present. With no health insurance coverage, even Quintyne, who is known for her resilience, needed help and the Trents 95 Alumni came running.

Former schoolmate Psyche Burke, an economist at the Ministry of Labour and Social Partnership Relations, spoke on behalf of the Alumni.

“Let me say from the onset when myself and fellow classmates heard about Ruth’s illness, we were all saddened. The desire to help and to bring some measure of comfort to her during this time was very overpowering,” Burke explained.

“Trents 95 Alumni, birthed out of the immediate need to help schoolmate Ruth Quintyne, has as its mission to socially connect Trents Class of ’95 old scholars and to provide relief to those in need by reason of ill-health, disability, financial hardship or other disadvantages.”

Giving thanks, she further highlighted that it was only through receiving the help of Corporate Barbados and the kindhearted citizens who contributed in many ways, that they were able to present the cheque. (AS)