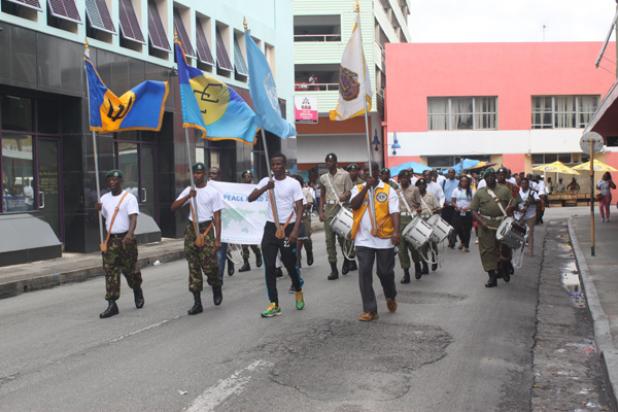 Barbados Defence Force members leading the way during yesterday’s Walk For Peace in The City.

Locals come together for Walk For Peace in The City

Overcast skies and occasional showers were no deterrent for the hundreds of Barbadians who took part in yesterday’s Walk For Peace in The City.

The Walk, which comes off ahead of the International Day of Peace, which will be observed on September 21st, was organised by Universal Peace Federation (UPF).

Secretary General, Gail Veith, told The Barbados Advocate that this is the second year for the event. It seeks to bring people together and to show that regardless of their race, religion or nationality, individuals can work together.

“This Peace Walk was initiated by the Universal Peace Federation, and our local chapter, the Barbados National Peace Council. We are walking and working with 120 other countries around the world, fulfilling the dream of One Global Family… We are a non-governmental organisation in consultative status with the Economic and Social Council of the United Nations.”