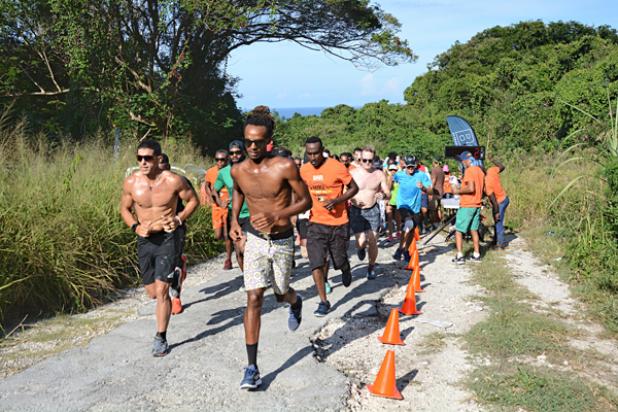 The participants of Barbadian Adventure Race are off to start the 10k Challenge at Pot House, St. John. From the far right, first place male finisher Randy Licorish led the group on Saturday. With 100 participants, the group raised $15,000 towards The Bahamas relief effort.

Members of the local fitness community participated in the Barbados Adventure Race (BAR) 10k Challenge in Pot House, St. John, to raise funds for the Bahamians affected by Hurricane Dorian.

The event, held on September 14 at 3p.m., was a challenge in which each person had to complete five grueling laps of 1K uphill, and 1K back down. Randy Licorish was the first male to finish the event, while Emma Hutson was the first female.

The total of $15,000 in funds raised came from donations of the 100 participants which were matched by The AmaroneTrust. Additional support came from Republic Bank which assisted with promotion, Upbeat which donated the T shirts for sale, and Run246 which donated cash.

Race Director of Barbados Adventure Race, George Griffith explained that the goal was for each participant to donate at least $25. Those who contributed $50 were eligible to receive a T shirt or BAR water bottle, and for anyone who came in under one hour and forty minutes, BAR made an additional donation of $20.

Griffith appreciated the generosity of the participants and their commitment to the new sport.

“I’m super grateful that so many people gave up their time, energy and cash to come and support this worthy cause. I know that $15,000 is a mere drop of water in the ocean of help that is needed but if we all do our part we can collectively start to make a difference,” George Griffith stated.

The funds raised by BAR will be handed over as a cash donation to Republic Bank which is making donations to The Bahamas relief effort.

The Barbados Adventure Race is the brainchild of George Griffith. The sport has grown over the years and in June 2019, the intense fitness event which tests endurance and physical strength had 58 teams of four which is 232 participants. Barbados Adventure Race is now part of the Obstacle Course Racing Federation and it is an internationally recognised world championship qualifying race, with the next edition coming November 23 and 24, 2019.