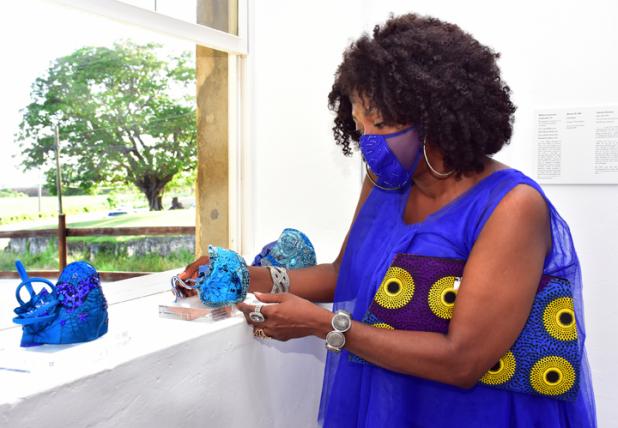 Designer Pauline Bellamy explains her concept behind her blue textured masks in The Blue exhibit at The Brighton Storeroom this past weekend.

Last weekend The Brighton Storeroom exploded with colour and Pauline Bellamy, along with Kraig Yearwood, each contributed beautiful pieces saturated with the colour blue.

The post-lockdown exhibit themed The Blue, was the third recent showing for the gallery and included works from local artists and designers. Designer Pauline Bellamy was eager to be part of the showcase and explained why to The Barbados Advocate.

“As a creative I always jump on opportunities to exhibit my pieces. It was a no-brainier. They asked and of course I said yes because it is an opportunity for me to be artistic,” said the designer.

Bellamy explained that the concept behind her work was texture and in response to COVID-19, designed a number of face masks with varying hues of the blue. Also on display was her Blue Dress, which was the only piece specially made for the Blue exhibit.

“The whole idea is to work with the colour blue as well as work with textures. Every one is a collage of the different colours of blue,” she explained.

Dressed in royal blue, the creative encouraged young dreamers to go after what they love. She explained that putting oneself out there and being exposed to various aspects of life and culture allowed a person to better express themselves.

“You have to love what you do and you have to believe in yourself. You have to have a passion for it, whether it pays the bills or not. If you put your love into it, it is going to show, if you immerse yourself into it, it stands out because you are putting your heart and soul into it. That is what art is about,” said Bellamy.

Artist and designer Kraig Yearwood displayed a blue clutch bag from his line Stuff, which portrayed his talents for design as well as art.

“I just love products and I see everything as being in the same realm of creativity, one thing feeds the other,” explained Yearwood.

Stuff, according to Yearwood was an experimental line, which was inspired in moments of insomnia and daring. The artist highlighted that his journey began long ago and continued with his work on display in the gallery.

“As an artist, I have always been painting and working visually. I did graphic design at the BCC (Barbados Community College) and since then have been into freelance graphic design,” said Yearwood.

The two designers mingled with other artists and designers as well as guests who visited the gallery in Brighton, St. George. The exhibit, which is open every Saturday from 6:30 to 10:30 a.m. runs to mid-September and is free to the public. (AS)