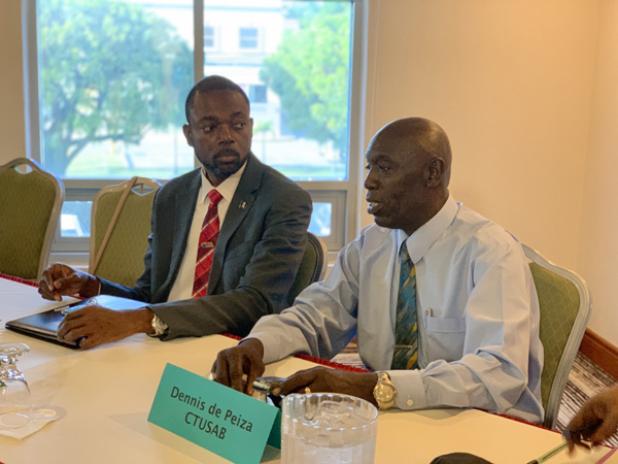 Minister of Labour and Social Partnership Relations, Colin Jordan (left), in conversation with Dennis de Peiza, General Secretary of the Congress of Trade Unions and Staff Associations of Barbados (CTUSAB).

The Ministry of Labour and Social Partnership Relations is working assiduously to complete anti-discrimination legislation.

Speaking during the presentation of findings of the ILO-PSI Pay Equity Project that took place recently, Minister of Labour and Social Partnership Relations, Colin Jordan, explained that this law would seek to protect both men and women from discrimination in relation to job creation, recruitment and employment.

He assured that the draft legislation should be completed before the end of the month, as the Office of the Chief Parliamentary Council has indicated that it be finished by then.

Jordan noted that this legislation may seem unnecessary as a popular narrative in Barbados is that there is equal opportunity for both men and women in the areas of education and employment, however deeper research shows that this is not the case.

He stated that even though statistics show that more women are employed than men, inequality remains.

“If you look closely, the reality is that while women have made significant progress in Barbados, there are some stark realities demonstrating that issues of inequality and inequity remain. Women do outnumber men, accounting for 52% of the adult population, but in the last 25 years, the participation rate of women has remained lower than that of men, and unemployment among women was consistently higher than that of men - estimated at 11% in 2018 compared to 8.4% for men,” he said.

“As a citizen of Barbados, as a father of daughters and a husband, as a representative of people and Minister with responsibility for Labour, I cannot afford to ignore the disparities that the statistics show.

“For women and men to benefit equitably from economic growth, we must acknowledge these disparities and access whether they exist due to gender biases, stereotypes and prejudices, some forms of institutionalised discrimination or disparate bargaining power between the sexes. Only then can we take the steps to address these inequalities with strategic, evidence-based policies and programmes that are gender responsive.”