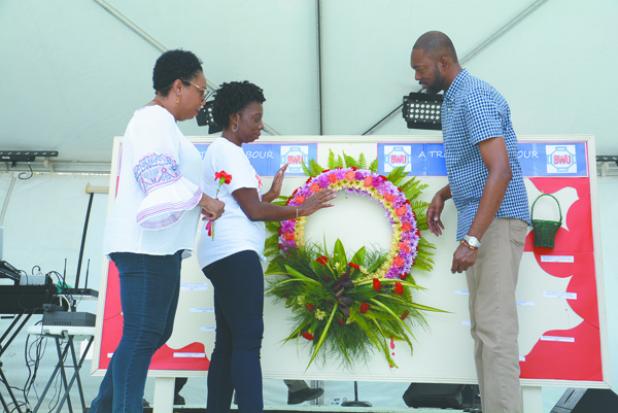 Minister of Labour Colin Jordan (right) with General Secretary of BWU Toni Moore (centre) and Jacqueline Gill of the Barbados Hotel and Tourism Association during a wreath
ceremony at Solidarity House yesterday.

Labour Minister Colin Jordan has given the assurance that minimum wage legislation is still on the cards for Barbados.

He was speaking to the media yesterday after joining several top officials from the labour movement and other representative bodies to lay a wreath and flowers in tribute to fallen labour leaders, at the Barbados Workers’ Union Solidarity House, as part of the new-look May Day celebrations.

Minister Jordan, while not being able to give an exact figure, gave the assurance that as stated in the Barbados Labour Party’s Manifesto, a national minimum wage should be created.

“At this point there is no national minimum wage. There is a minimum wage for shop assistants only and the Minimum Wage Advisory Committee, which is a tripartite committee that falls within the purview of the Ministry of Labour and Social Partnership Relations, is looking at the possibility of creating that national minimum wage, but working through the mechanics of it.”

“We have spoken to them already. We have spoken to the employers’ representatives at a committee meeting and we have indicated to them that like we have done in government since we came into Office, there is going to be a sharing of information but also a sharing in the burden of adjustment.”

Minister Jordan said that it was recognised when a pay increase for public workers was given soon after the BLP administration came into Office, the workers in the private sector would also have to get “something.”

“But we will not do it rashly. It is not our style to do things rashly. We will consider it in a tripartite way and again that has been a mode of our operation where we engage all sectors ...We will engage in the tripartite structure, that is the Minimum Wage Board, we will work through what is possible and we will work through the mechanics of it and the timing of it. But it is on the table,” he assured. (JH)