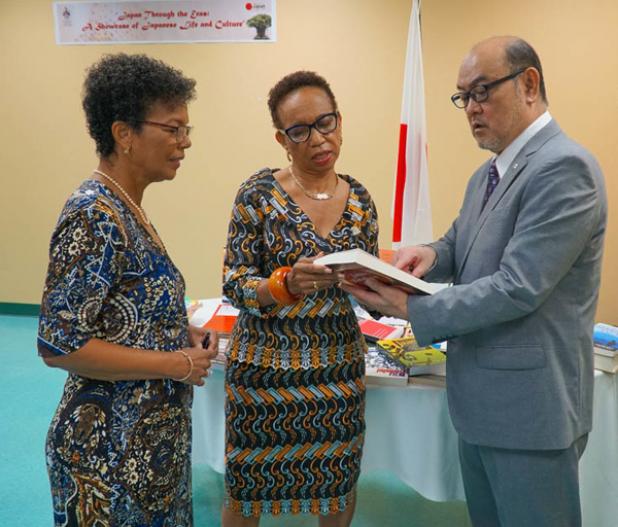 Ambassador of Japan to Barbados, H.E. Teruhiko Shinada (right), viewing one of the books presented to The Sidney Martin Library with The Principal, Pro-Vice Chancellor of The University of the West Indies (UWI) Cave Hill Campus, Professor V. Eudine Barriteau (centre) and Officer-in-Charge of the library, Judith Toppin

Japan builds on relationship with The UWI Cave Hill Campus

The Embassy of Japan in Barbados is ensuring that students of The University of the West Indies (UWI) Cave Hill Campus gain a better understanding of Japanese life and culture. A donation of books on contemporary Japan has therefore been presented to The Sidney Martin Library.

“I am told that this generous contribution was as a result of the hard work and ingenuity of Ambassador Shinada, who recommended to The Nippon Foundation that our Library be considered for such a donation. Of course, I am not surprised, as Ambassador Shinada has always demonstrated a keen interest in the academic development of the Cave Hill Campus,” Professor Barriteau pointed out.

“I am sure that these books will foster a deeper knowledge of historic and contemporary Japan, providing valuable knowledge of one of Asia’s and indeed the world’s, strong and continuous civilizations.”

The Principal further expressed that The University is excited at all the opportunities presented by the educational material to advance new prospects for cooperation and benefits. In fact, she disclosed that the Cave Hill Campus will be exploring with incoming Dean of the Faculty of Humanities and Education, Professor Frederick Ochieng-Odhiambo, the establishment of a Minor in Japanese Studies.

“It is critical that Cave Hill continues to reflect the wider world in which our students will live and work...I want to say to all young people that an education in the Faculty of Humanities and Education will take you all over the world. Do not overlook that faculty – we are waiting here to receive you. We do a number of languages and who knows, we might soon be teaching Japanese.”

In addition to the donation, the Embassy of Japan also launched “Japan through the Eras: A Showcase of Japanese Life and Culture”, which will also be hosted at the Cave Hill Campus Library over the next four days.

Ambassador Shinada highlighted that on display will be various aspects of Japanese culture, including today’s showing of the film “Bushi no Kondate – A Tale of Samurai Cooking: A True Love Story,”.

“The timing of our event has a very symbolic meaning,” the Ambassador expressed, revealing that May 1st this year, marked the accession to the Throne of His Majesty the Emperor Naruhito, and the beginning of the new Japanese era called “Reiwa”, which means “Beautiful Harmony”.

“On April 30th this year, the former Emperor of Japan, Emperor of Heisei, abdicated the throne due to his age and health conditions. The last abdication of a living Emperor took place more than 200 years ago. This fact proves just how incredibly rare abdication is within the unbroken Imperial line…The son of the Emperor Naruhito was enthroned as the 126th Emperor of Japan”.

To mark this historic occasion, the Ambassador has extended an invitation to members of the public to sign a congratulations book which will be opened at the Embassy of Japan until Wednesday.

“The signed book will then be sent to the Imperial Palace in Tokyo as a testament to the amicable relation between our two countries,” he said. (TL)