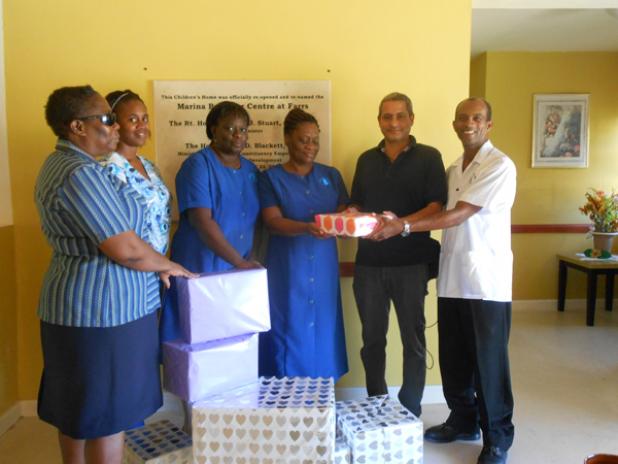 Head of Mission for the Embassy of the Bolivarian Republic of Venezuela in Barbados, Francisco Perez Santana, made the donations at the Farrs Children’s Home, accompanied by the IVCC staff.

Tue, 10/25/2016 - 12:00am
In an effort to raise social awareness and to achieve an objective of helping those less fortunate, the Venezuelan Institute for Culture and Cooperation (IVCC) began its third Charity Drive 2016 in January, 2016, intended to benefit Farrs Children’s Home in St. Peter.
The donations comprised of non-perishable food items, personal hygiene products, clothing and a First Aid Kit all of which were contributed by students of the IVCC and the staff of the Venezuelan Embassy.
The donations were presented at the Farrs Children’s Home in St. Peter on October 12, 2016, by the Head of Mission of the Embassy of the Bolivarian Republic of Venezuela in Barbados, Francisco Perez Santana, accompanied by the IVCC staff, and received by Jakeen Sealy, Parent Supervisor of the Farrs Children’s Home as well as its staff members Sonia Jordan, Pamela Greaves and Rhonda Scantlebury.
The home currently houses twelve children aged 11 to 17, it was renovated and newly renamed the “Marina Brewster Centre at Farrs” in 2014 but has been in operation as a children’s home since the 1970s.
Head of Venezuelan Mission, Francisco Perez Santana, expressed the sincerest hope that the items contributed would help to sustain the wards of the home. He further iterated that it was very important to have initiatives such as this one, which focus
on helping those in need and hoped that the Embassy and its Venezuelan Institute could continue to give selflessly.
Jakeen Sealy thanked the Venezuelan government and people for their donation and assured that it would be used for the benefit of the wards of the home.