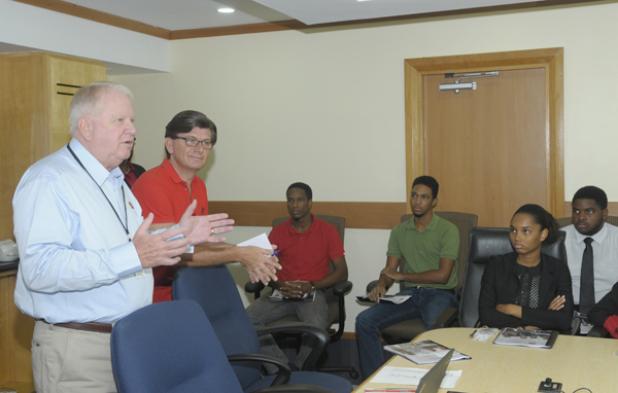 Chief Executive officer, Gary Brown (left) and Managing Director, Human Resources, Neil Brennan discuss career development with some of the summer interns who will be spending the next several weeks assigned to the bank’s Barbados business.

Ninety-four young people throughout the Caribbean are spending this year’s summer holiday cashing in on an opportunity to gain experience in the financial sector. They were chosen from scores of persons who applied to CIBC FirstCaribbean International Bank for internships at the bank’s operations in the region.

Some of the interns came to the bank through the University of the West Indies, as part of the long-standing Memorandum of Understanding between the bank and the UWI, which among other objectives, aims to give current and past students of the institution access to work experience at the bank.

The bank’s Managing Director, Human Resources, Neil Brennan, said the group of interns joining the bank was bigger than last year, which signalled the importance that CIBC FirstCaribbean attached to the programme. He therefore urged the chosen ones to make the most of the opportunity.

Brennan, who was addressing an orientation ceremony at the bank’s headquarters, Warrens, St. Michael, Barbados, also advised the 40 interns assigned to the Barbados operations, to use the opportunity to figure out what they wanted to do in the long term. He noted that he had studied engineering at university but later switched study to become an actuary before recognising that his strength and preference was working with people in human resources. Therefore, he encouraged the interns to talk with the bank’s employees as well as each other to find out about the experiences of others and gain as much knowledge as possible, since that would help them make career choices.

Earlier, Chief Executive Officer, Gary Brown, had told the interns that their first jobs would not necessarily turn out to be their life long careers, since people at the entry level stage were still figuring out what they wanted to do.
“It is early in your career and you are figuring out things; try to ask yourself where you want to be in five years. You generally have an idea but it is not until you get into the job that you really get to know what the various roles are about,” he said.

Brown told them that when he finished university, he told himself that he would have done anything except banking, but the bank’s CEO said, “Here I am and it is great.”

Focussing directly on their internship, the CEO urged them to “grasp this opportunity and do what you are assigned, you will learn something every day; I still do.”

He explained that CIBC FirstCaribbean International was a great bank which was client focussed. “There is no reason for us all to be here except for our clients. No matter what job you do here, whether you are facing the clients or in the back office, everything you do affects the client experience. It is critically important to recognise this,” he said.

Most of the trainees are at the tertiary level of education or have recently completed that stage.