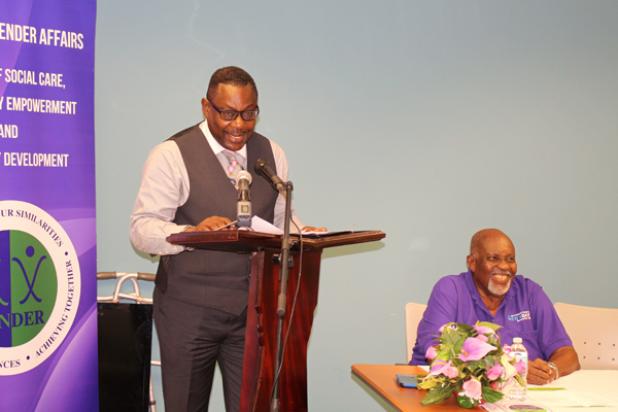 Minister of Social Care, Constituency Empowerment and Community Development, Steven Blackett (left) shares a light moment with chairperson Hartley Dottin, the deputy chair of the National Advisory Council on Gender and President of the Anglican Men’s Association, during the launch of the International Men’s Day (IMD) Week of Activities yesterday.

International Men’s Day significant for both men and boys

International Men’s Day, celebrated on November 19th, presents an opportunity for men and boys to reflect on the challenges that confront them and to also strive for solutions to overcome them.
This was the view shared by Minister of Social Care, Constituency Empowerment and Community Development, Steven Blackett, as the Bureau of Gender Affairs and local men’s organisations held an event to launch the International Men’s Day (IMD) Week of Activities yesterday, at the Baobab Tower in Warrens, St. Michael.

“Male on male violence is an issue of grave concern for our country. The increasing incidents of gun play in our society that has claimed the lives of a number of young men this year, serves as a reminder that all is not well among some of our young men and that as a society, we have a tremendous task ahead, if we are to save our future generation of young men,” Blackett said of one of the challenges.

“Likewise, the continued number of young men who find themselves incarcerated at Her Majesty’s Prison Dodds remains a grave concern and should galvanise us as a nation into seeking strategies and relevant programmes, that are geared towards providing an alternative option for our men to be productive members of society,” he added.

Blackett also pointed to the continued decline in the numbers of men accessing tertiary education as a source of concern, as well as the lack of attention paid by some Barbadian men to their health.

“Men have on numerous occasions been chastised for their lack of attendance at the doctor’s office or the health care facilities. Even though we have seen an improvement in this area,
especially in the area of testing, more needs to be done,” he stressed.

Acknowledging that the objectives of International Men’s Day include a focus on men’s and boy’s health, improving gender relations, promoting gender equality and highlighting positive role models, Minister Blackett also noted that the Day also seeks to recognise the contributions of men and boys, in various spheres of life. Noting the need to develop strategies and programmes that can channel both men and boys in a positive direction, Blackett however lauded the Bureau of Gender Affairs and the special Working Committee of males, for the push to highlight men in a positive way and for the work done so far to sustain International Men’s Day, for the second year to date. (RSM)