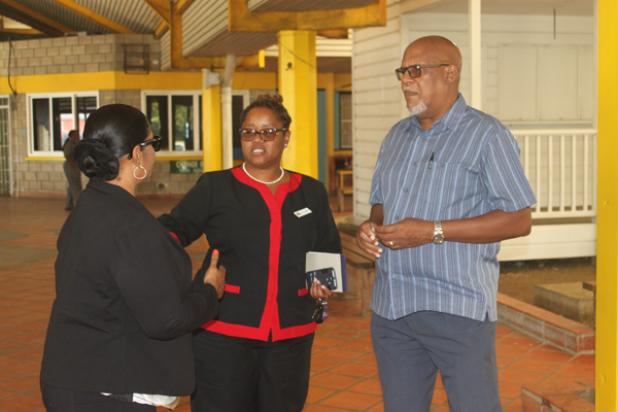 Integration date set for PSVs, Transport Board buses at Speightstown

Chairman of the Transport Authority, Ian Estwick says September 1 is the date from which public service vehicles (PSVs) will be “integrated with the Transport Board buses” at the Speightstown Bus Terminal.

He said this “permanent” move will see PSVs move from their current location on the outskirts of the Terminal to its western side. Passengers in the north of the island hoping to board these minibuses and route taxis will enter the Terminal and make their way to one of the gates numbered 7-11.

Estwick, who admitted he does not anticipate a positive response from the PSVs operators who will be asked to work from the Terminal, said the move comes out of concern for behaviour witnessed.

“It has been my experience in my first year that this is one sector that is extremely resistant to change. So I don’t expect that it will be all bed of roses… but it is something that has to happen. It is much too dangerous out there and I have seen school children climbing through bus windows, not only to the eastern side but to the western side, which means they are exposing themselves to traffic and we can’t sit back as an Authority and let something like that happen because then we wouldn’t be able to justify our existence at all.”

Joy-Ann Haigh who has been contracted by Transport Authority to conduct a Commuters Advocacy Programme.

He said before PSVs can commence using the western end of the Terminal alterations which are ongoing have to be completed and improvements have to be made to the public toilets in Terminal. He also said the Motor Omnibus Terminals Act has to be passed.

“The big thing we are waiting on is legislative changes to be on the bus Terminals Act which right now only allows for Transport Board’s buses to any terminal except the CRT, Constitution River Terminal. So we have got to get the legislation change to allow three forms of public transportation to come in.” (MG)