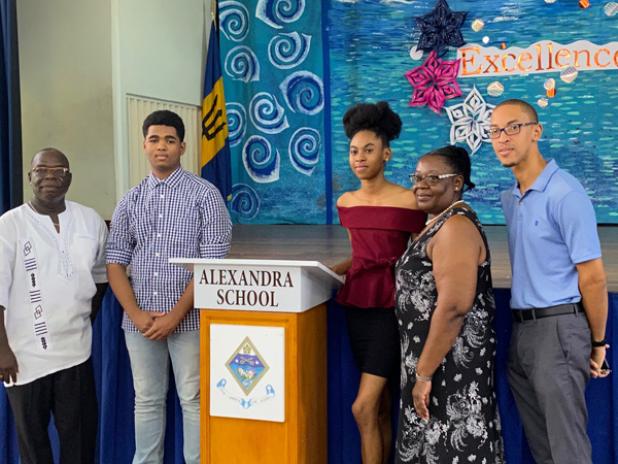 Recently, the Indian Association of Barbados presented their annual awards to the best outgoing students of a newer secondary school.

Two pupils of the Alexandra Secondary School were this year’s recipients. They were Jennelle Bovell and Brandon Hinkson, who were rewarded for their excellent performance in the Caribbean Secondary Education Certificate (CSEC) Examinations.

The ceremony was held at the Alexandra School Auditorium.

Dr. Harris, Honorary Consul for India in Barbados, encouraged the students to work hard towards achieving their goals and to have pride in their work, their community and their country.

She indicated that the awards were usually given in August in celebration of India’s independence, but had to be postponed last year. Nonetheless, the Indian Association of Barbados was pleased to now make the presentation to mark India’s Republic Day on January 26, 2020.

Principal, Mr. Orson Alleyne said he was honoured that Alexandra Secondary School was chosen and expressed gratitude for the contribution that the Indian community makes towards Barbados as a whole.

He noted that Bovell and Hinkson are both very deserving of this award, they continue to work well at their present schools and must be commended for their achievements.

“We recognise that Barbados, the Caribbean and indeed the wider world benefits greatly from the education of Barbadian youth,” he stated.

Both students spoke of their plans for the future and thanked the school and the Indian Association.

The Indian Association of Barbados began this initiative in 1997 to mark India’s 50th Independence Anniversary and has since given awards to the deserving students of all the newer secondary schools of Barbados.