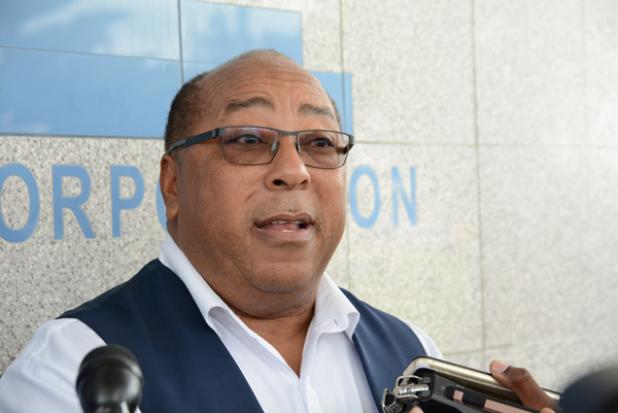 Many of the problems that continue to be faced by the Barbados Water Authority (BWA) in relation to the South Coast Sewage Plant are the result of illegal actions taken by members of the public, including hundreds of illegal connections.

That’s according to Minister of Agriculture, Food, Fisheries and Water Resource Management, Dr. David Estwick. Yesterday morning, Estwick, the Democratic Labour Party’s candidate for St. Philip West, told the media that as the DLP rolls out its campaign, he intends to outline the truth regarding the failure of the plant. He stated that while some persons may want to blame the problems on poor maintenance, nothing could be further from the truth.

“It is not a maintenance issue; what has happened with the South Coast Sewage Plant is that the distribution system has collapsed, the foundation of the distribution system has collapsed… The other issue of importance is that somebody gine [sic] have to explain to me how come there are 16 000-plus people who [are] connected and ain’t registered with the Barbados Water Authority to pay their bill. Somebody gine (sic) also have to explain to me how come that you could have an entire bath towel, an entire face towel, diapers, plastic bag and all sort of stuff down a sewer when only water and faeces supposed to be down in there. And all these sort of things will have to come out during the elections,” he stated.

Estwick added, “In addition, the number of illegal connections has been tremendous and many of those connections have broken the Town Planning rules and the EPD (Environmental Protection Department) rules and the rules of the Barbados Water Authority. I have all of them and some of them are keeping the most noise, I have nothing to say to them until. All I will say is this, it is illegal and against the Town Planning rules to take the water off of your roofs and run it into the sewers of Barbados. When the sewers are overflowing with respect to when raining is falling, that is where the water is coming from,” he said.

With that in mind, he made it clear the BWA is facing the problem head on. As such, he disclosed that some of the culprits have already received letters from the Authority regarding the illegal connections, outlining the breaches in relation to the rules of the BWA, EPD and Town Planning, and have been asked to make the necessary corrections. The minister said while he hopes they comply, if they choose not to, he said there are alternate steps for the BWA to pursue.

“I’ve made it quite clear to management, if you have to utilise legal force to make sure that they comply, then that is what you have to do in the interest of the people of Barbados,” he said.

His comments came as he contended that the sewage issues are not a political matter, but a technical one. Estwick maintained it is a matter of engineering deficits which he argued were not caused by the current Administration. Moreover, he explained that the number of connections and the volume coming through existing ones have skyrocketed.
“Let’s say a hotel that would have been 40 rooms is now 150 rooms and other hotels would have been built. What has happened is that the capacity issues in regards to the plant have been surpassed,” he affirmed.

The Water Resource Management Minister made the point while noting that it is the current government which is responsible for setting up the Wastewater Division at the BWA, though such had been recommended under the previous government. He said such a division was definitely needed as the technologies applied to potable water and wastewater are different, as are the administrative management practices.

“[Therefore] in the middle of a crisis I took that decision to form a Wastewater Division led by Patricia Inniss and as a result of that over the last few weeks we have been staffing it… It is out of that new management that the information is being revealed as to what had been the practice and the custom over the many, many years,” he indicated. (JRT)