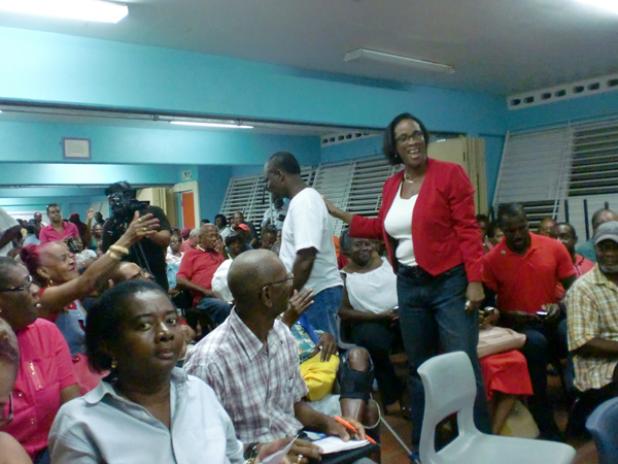 Barbados Labour Party candidate for St James South, Sandra Husbands being cheered on by supporters on hearing she won the nomination.

Mon, 10/24/2016 - 12:00am
Sandra Husbands has secured the nomination as the Barbados Labour Party (BLP) candidate for St James South.
On Saturday night, the Management Consultant defeated newcomer Attorney-at-law and International Trade Specialist, Dr Ronnie Yearwood. Over 200 enthusiastic supporters gathered at West Terrace Primary School to witness this highly anticipated election and rejoiced when BLP General Secretary Senator Dr Jerome Walcott announced her the winner with 87 votes to Dr Yearwood’s 41.
“St James South you are staying with Sandra,” expressed an excited Husbands who will again go up against Minister of Industry, International Business, Commerce and Small Business Development, Donville Inniss in the next general election.
She declared what the 10,000 strong constituents of St James South need is representation.
“I am capable of giving St James South that leadership,” she stressed.
“Since the last election I have hit the streets; I have canvased, I have been going into every nook and cranny. What I was seeking to do while canvasing is to be able to help build community.”
The candidate said the current administration has been the biggest burden to the people of the constituency, signalling the desire to send them packing. “We need to send Donville Innisss packing too.”
“He has not been able to produce as Minister of Commerce to protect the citizens of St James south,” she told supporters, revealing the formation of a St James South Consumers Action Network.
“We already have 30 eager St James South residents who are ready to work with this programme so that we can begin to fight back and give our people a fighting chance.”
Husbands also thanked Dr Yearwood for “a very spirited campaign”, adding “I also look forward to seeing you find your place, to be able to make your contribution.”
“Dr Yearwood is correct when he said the next election is not going to be handed to us on a platter. We are going to have to work and work hard.”
Leader of the Opposition, the Hon. Mia Mottley congratulated Husbands on her victory, as well as thanked her opponent Dr Yearwood for his dedication.
She said the Barbados Labour Party is always strongest when it opens itself up to competition.
“It is a good thing for a leader to have the problem of many contestants for one position. In St John there are four…That says more about the state of the country and the confidence in the team that this Barbados Labour Party is building, to prepare itself for the rescue of this country.”
Mottley urged both Husbands and Dr Yearwood to work together. “I expect both of you now to recognise that the mission that lies before us in this constituency is Donville Inniss, but in this country is a Democratic Labour Party that has gone way off track...” (TL)