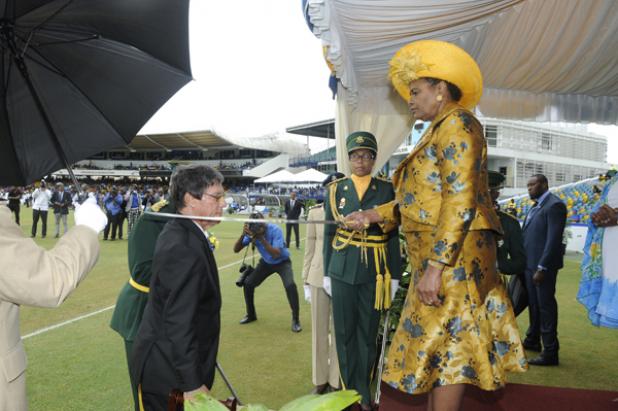 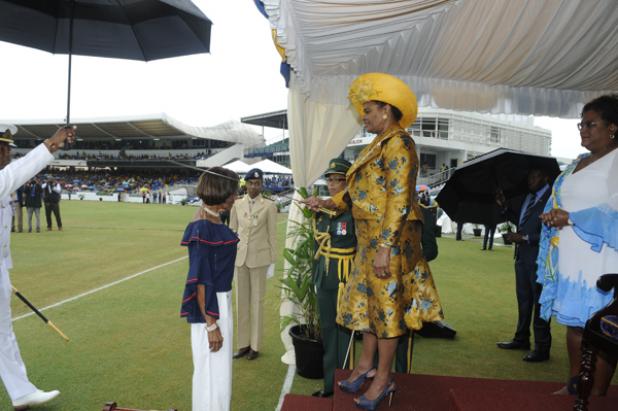 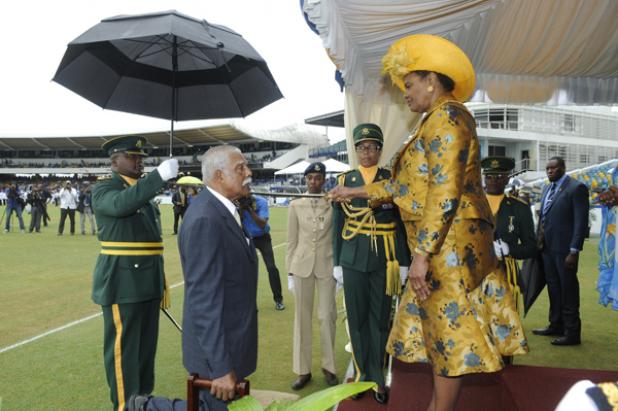 Sir Kenneth kneels as he receives the top honour in the island.

Some 27 individuals were recognised yesterday in several categories in this country’s 2018 Independence Honours, and among the honourees was retired educator Avisene Carrington who celebrated her 100th birthday in September.

Those awarded were presented with their insignia by Governor General Dame Sandra Mason yesterday morning, during a new format for the Independence Parade, which was held for the first time at Kensington Oval.

The ceremony, usually held in the month of January at Government House was witnessed by Prime Minister Mia Amor Mottley and Chief Justice Sir Marston Gibson, who stood on either side of the Governor General, and by hundreds of Barbadians who came out to celebrate the country’s 52nd anniversary of Independence. The occasion would mark the second time in this country’s history that a knighthood would be conferred in a public setting. The first occasion was in 1975 when Sir Garfield Sobers, this country’s only living National Hero, was knighted by Queen Elizabeth II at the Garrison Savannah.

The first to approach the dais yesterday was Dame Avisene Carrington, who was among three receiving the island’s top honour, that of Knight or Dame of St. Andrew. The other two honourees were retired chartered accountant, Sir Kenneth Hewitt and a former chairman of the Electoral and Boundaries Commission, Sir Philip Serrao.
Dame Avisene, the first centenarian to receive such an honour, has been recognised for not only the pioneering role she played in early childhood education, but the outstanding contribution she made to primary education in Barbados during her distinguished career. The former owner and principal of the now defunct Merrivale Preparatory School, which closed in 2010 after 51 years of service, was previously awarded the Silver Crown of Merit in the Barbados Independence Awards of 1994 for her contribution to primary education in Barbados.
The mother of three dedicated most of her life to educating Barbadians as well as many from abroad. Her nurturing spirit and commitment to that task helped to form strong foundations for many students including Prime Minister Mia Amor Mottley.
Another awardee, Sir Kenneth Hewitt has been a pioneer in his chosen field. The graduate of Mc. Gill University on his return to Barbados in 1969, founded Ken Hewitt & Co., Chartered Accountants. This firm would in 1973 merge with the international accounting firm Peat, Marwick Mitchell & Co., now KPMG, and Sir Kenneth would steer the ship as the Managing Partner until June 1998 when he retired.

Sir Kenneth, who some months ago acted as Governor General while Dame Sandra Mason was away, has used his experience to be a business advisor to enterprises in areas such as insurance, banking, manufacturing, air transport, tourism, media, retail and public utilities.

He is also credited with making a significant contribution to the birth and development of the local International Business Services sector and it is for that role he played, that he has been conferred the honour of the Knight of St. Andrew. Throughout his career in that field, he has served as chairman or member of the various advisory committees established to develop and guide that sector.

This is not the first time that the father of three and grandfather of six has been recognised for his work, having been awarded the Commander of the British Empire in 2002 and the Barbados Jubilee Honour in 2016.

The third awardee, Sir Philip Serrao, is an attorney-at-law with a distinguished career. The father of two started his legal career at Carrington & Sealy and later joined the firm FitzWilliam, Stone & Alcazar in 1972, first as a solicitor and would later become an attorney-at-law with the fusion of the branches of the legal profession. Since 1983 he has been Senior Partner of that firm.

Sir Philip has been recognised for the outstanding contribution he made in respect of modernising the Barbados Electoral System and its administrative processes. He served as a Member of the Electoral & Boundaries Commission for the period 1985 to 1990 and was its Chairman, uninterruptedly for a period of 14 years, from 1996 to 2010. During his tenure, one of the fundamental decisions taken and implemented, was contained in a report and recommendations made to the then Prime Minister, Owen Arthur, for the creation of two new constituencies – St. James Central and St. Philip West, bringing the total number of constituencies to 30. It also suggested that alterations be made to the boundaries of certain constituencies and that too was executed.

As we celebrate the 52nd Anniversary of Independence, the Barbados Service Star has also been conferred on five individuals. These persons are Victor Cheeseman, Mitchell Clarke, Wilma Clarke, Bernadette Harris and Heather Williams. Receiving the Barbados Service Medal are Victor Aymes, Beryl Bridgeman, Rev. Dr. Margaret Eversley, Lorenzo Harewood and Anderson Kinch. Also honoured this year was Bradley Broomes. He received the Barbados Bravery Medal for saving the lives of a husband and wife who experienced difficulty while swimming at the beach by Cobblers Cove Hotel.

Following the parade, the Independence Honours ceremony and an address by Prime Minister Mottley, the troops engaged in a procession through Bridgetown dubbed, ‘We Barbados’.