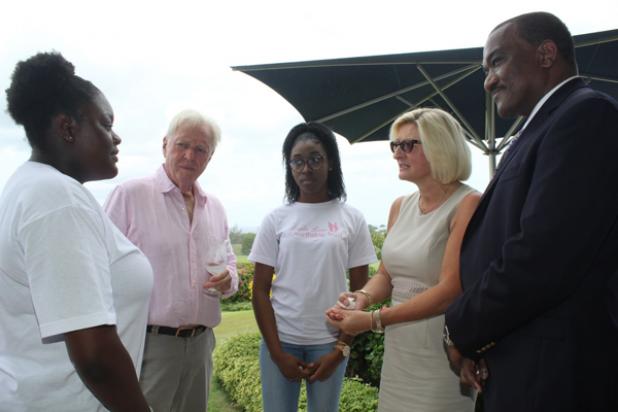 The quality of life of scores of Barbadian children have been improved in a very significant way thanks to a partnership between Sandy Lane Charitable Trust (SLCT), the World Paediatric Project and the Queen Elizabeth Hospital (QEH).

To date, this “tri-partnership” formed in 2015 by SLCT has successfully completed 103 orthopaedic surgeries on 89 children, at a cost of in excess of BB$20 million.

Commending the undertaking, Minister Of Health And Wellness, Lt. Col. The Hon. Jeffrey Bostic said that such philanthropic efforts do not only provide benefits to those who are the recipients of services rendered, but accrues benefits for the organisations which provide the services.

“At the highest level there is a strong sense of solidarity, the knowledge of helping others, of caring, loving and giving for the wellbeing of others. This is not unusual or surprising because we human beings are “wired” for such action,” he expressed.

“Discussion on philanthropy in today’s economic environment, may naturally lead many persons to conclude that our interest as a Government is spurred on by our difficult economic position at this time. However, philanthropy is a vehicle for encouraging and cultivating the participation of civil society in national development”.

“In planning for the health sector, our approach for many years has been to embrace a whole-of-society approach, together with the whole-of-government approach for the public sector,” Minister Bostic said, adding that the adoption of these approaches has been driven largely by the response to the NCD epidemic, and efforts to reduce the damaging effects of these diseases on our population, especially our children.

Trustee of the Sandy Lane Charitable Trust, Julian Sacher noted that to many, these orthopaedic operations may not be seem as life threatening and therefore totally unnecessary, but when left unattended they cannot only cause severe and permanent damage to other organs, but also the psychology of the child.

“For those children not immediately requiring operations, The SLCT funded many different types of support including leg and back braces and various orthotics, such as special shoes, inserts and castings.”

The other added benefit which is difficult to quantify is the additional exposure and training received by the QEH doctors and technicians. Not only have local crews been given the opportunity to watch these unusual and complicated surgeries in Barbados, but SLCT has also funded several doctors and physiotherapists to travel oversees to observe operations and learn of new techniques from the WPP teams.

The hope for SLCT and WPP, now that the back log of orthopaedic surgeries in Barbados has almost been eradicated, is that the QEH orthopaedic team will use operating theatre time to complete the more routine cases on a more regular basis.