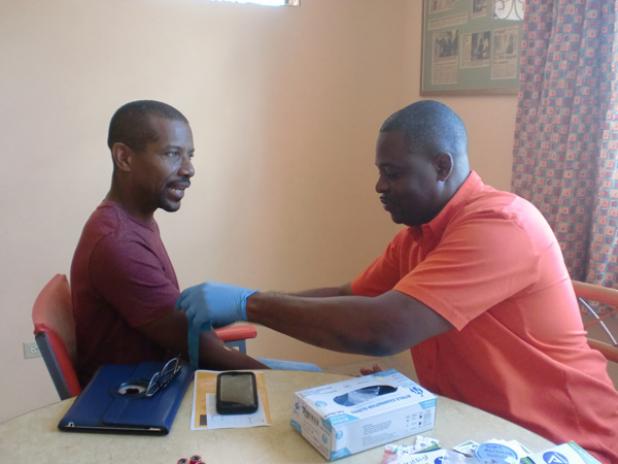 Sun, 01/15/2017 - 12:00am
Cancer Support Services (CSS) held its first Prostate Specific Antigen (PSA) screening yesterday.
CSS continues to promote early detection through the PSA test which has been widely used to screen men for prostate cancer.
The long line throughout the morning at the CSS “Arborside” Belmont Road, St. Michael office, was a clear indication that men are taking charge of their health.
One such client, 43-year-old, Troy Taylor, shared with The Barbados Advocate that it was his first time receiving the PSA screening. Noting that he has no history of cancer in his family, he still believes that it is important to get screened. “I was supposed to do the screening three years ago, because they recommend that you do it at 40 but now I am here. When I spoke to the lady here at CSS I told her I don’t have any irregularities, but I still think it’s best to do the screening, with early detection, the better off you will be.”
Christopher Derrell said it wasn’t his first time receiving the PSA screening, however, it was his first time at CSS. “I do have a risk of cancer in my family and you always hear about early detection, so being over 40, I decided it is important to get the screening.”
He also commended the CSS initiative, describing the environment as inviting. “I think it’s a fantastic opportunity to be among men, talk men stuff and get your health checked. I actually enjoy being in this environment. It kind of takes the fear out of
getting checked so I will definitely be coming back.”
CSS President Kathy-Ann Kelly-Springer took the opportunity to thank their donors who have made it possible for CSS to carry out the screening at the favourable rate of $40. “Because of the donors who have come on board funding this particular programme, we have been able to provide the testing at a good rate to the community. I want to thank them for helping us to help others.”
Men receiving screening also took part in an interactive session with Consultant Urologist Dr. Jeetu Nebhnani, who discussed the importance of screening and gave in depth information on the prostate.
CSS hopes to continue PSA screening on the first Saturday in March.