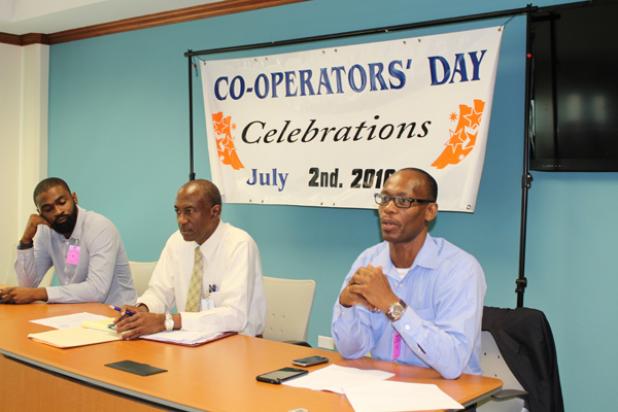 Sun, 07/03/2016 - 12:00am
While the credit union movement in Barbados has made a sterling contribution to the development of the economic landscape in this country, some concern has been expressed about the lack of growth in farming, marketing and other cooperatives.
Dr. Philmore Alleyne, Lecturer in Accounting at the UWI, Cave Hill Campus noted his concern about the issue during a lunch- time Co-operative Forum held at the Baobab Towers recently, ahead of International Co-operators Day, which was celebrated yesterday.
Dr. Alleyne participated in a panel discussion held on the topic, “Is the Co-operative Sector the missing link in Barbados’ economic recovery?” He shared the panel with Jeremy Stephen, Lecturer in Economics at UWI and President of the Barbados Economics Society.
“Credit unions…play a vital role, where they provide access to low cost financing. They have also transformed the economic and social status of members, but one important thing that I believe and I still argue that the credit union’s role has been, is in assisting in developing strategies of self-reliance, in dealing with individual community and national problems. That’s what the credit union has been doing, so it has been making that positive contrition right through,” Alleyne said.
He however stated, “Of concern to me is the pace of growth or lack thereof of cooperatives such as farming and retail, other cooperatives (such as) marketing cooperatives in the movement. We do not have too many cooperatives that have been as successful as their credit union counterparts.”
He continued, “While the larger credit unions have been successful, the smaller ones have struggled to meet compliance obligations, having ageing membership, struggled to find management with the necessary experience and time to develop to cooperative activities and it is a fact. It is based on volunteerism and it does not have the glamour, I suspect, as the credit unions, because the credit unions are operating more like a banking operation in competition.”
Jeremy Stephen, who agreed with Alleyne, meanwhile shared his opinion on why some cooperatives have not been that successful in Barbados.
“One of the things I think that we as a Barbadian people and as a Caribbean people have overlooked is that the reason the cooperative movement has not successfully spanned all sectors is because of political relevance,” he suggested.
He noted that for example, in most small open economies, farming cooperatives are an important part of the economy and they receive subsidies as well  that aid them in being competitive. However, he pointed out that he was hardpressed to find a successful farming cooperative here. He was also critical of Government for going after credit unions, through the taxation system, simply because of their liquidity. (RSM)