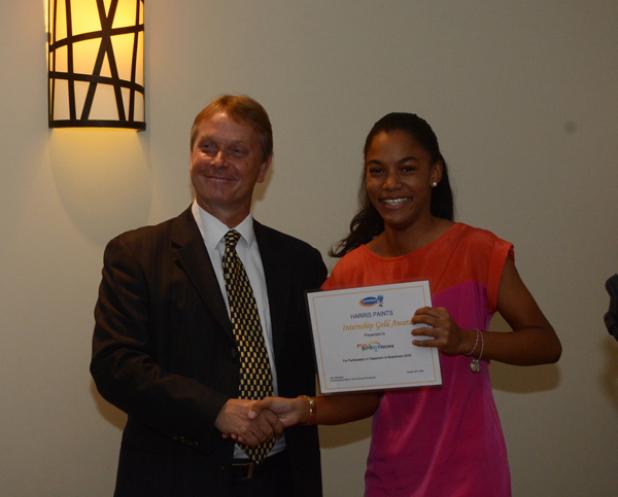 (at right) CEO of Full Spectrum Saskia Rock as she accepted her awards (from left) and Harris Paints CEO Ian Kenyon.

Tue, 10/25/2016 - 12:00am
Twenty-seven eager young minds displayed their abilities to come up with a business strategy to lead one of this island’s indigenous companies into the future and it paid off in a big way.
After one week working at Harris Paints participating in the Schoolroom to the Boardroom programme, the entire group was offered an internship by the company’s Chief Executive Officer Ian Kenyon.
The unprecedented move brought loud screams, cheers and a few joyful tears from the group, aptly named Full Spectrum, which is made up of students from Harrison College, the Lodge School, the Barbados Community College and Codrington College.
“I have been fortunate to have worked with some of the top agencies in the United Kingdom, Belgium, Canada, Puerto Rico and the Caribbean and I can honestly say Full Spectrum would have beaten them all in winning the Harris Business,” he said, outlining that the group’s business plan will be the core of the innovations Harris would be bringing to the market over the next two to three years.
Saying that the logistics of the internship would have to be worked out around school days and holidays, he noted that the team would have the opportunity to work side by side with the top executives of the company and with the top Caribbean agencies in order to learn best practice innovation, marketing and advertising.
“It will look great on your CV and could actually lead to a full time job offer at Harris in the future,” he continued.
Kenyon extended his thanks to the Barbados Entrepreneurial Foundation for creating the programme and the Rotary Club of Barbados for their support.
Speaking on behalf of her company, Full Spectrum, Saskia Rock thanked all the various entities for Schoolroom to the Boardroom programme revealing that it had helped to build their weaknesses, while developing strengths.
Both Kenyon and Rock also gave credit to the work done by Chief Executive Officer of Entrepreneurs In Action Derek Browne for facilitating the programme. (JMB)