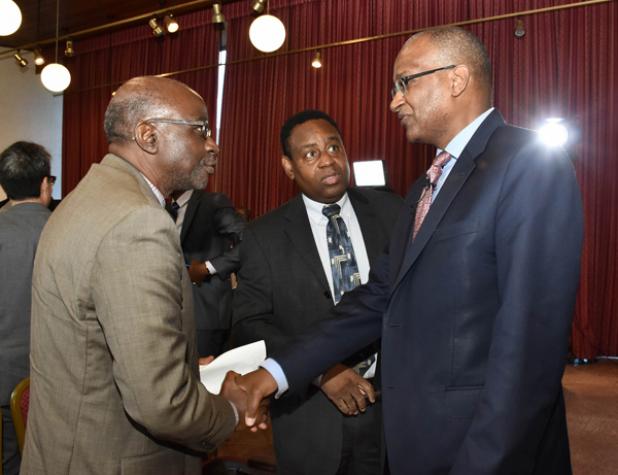 THE changing nature of the world economy is demanding that there be greater co-operation between Barbados and its Caribbean Community trading partners as well as with African countries.

Governor of the Central Bank of Kenya, Dr. Patrick Njoroge, put this to his audience yesterday while promoting more trade and commercial contacts between developing countries.

He made the comments in a lecture titled: “The Global Economy: A Kenyan Perspective”.

The official, who is on an official visit to Barbados, told the large audience at the Courtney Blackman Grand Salle that the world has become more fragile and that situation is changing rapidly.

He said that while trade wars were settled as far back as the 1960s, some 50 years later a similar event has emerged between the United States and China. The big countries are no longer co-operating with each other, and rather, are behaving like crabs in a barrel while focusing only on a race to the bottom.

“The markets are changing and they are more volatile and it is going to get worse, as there is no more stabilising factors,”the Kenyan official reasoned while noting that today’s world is not where it was 10 years ago.

Saying that there are at least two solutions to this situation, Dr. Njoroge pointed out that the first must be that countries including Barbados and Kenya, have to strengthen regionalism in their areas while looking to cooperate more globally.

He remarked that this was a policy that led the anti colonial movement years ago. To this end, economic co-operation was one of the issues discussed in talks he has held with Barbados officials, so that the people of both countries and the Caribbean will benefit.

In fact the Central Bank Governor said they are “looking at Barbados being connected to CARICOM and to the hinterlands of the Americas.”

That, he explained, would give Kenya an opportunity to use Barbados as a staging point for his country to do more business with Brazil, which at the same time would also benefit Barbadians.

Dr. Njoroge said that the other solution is forging strategic relationships.

According to him, in the past there was more co-operation between big countries and the developing ones.

He said that catastrophes have also come to affect countries including the drought in Ethiopia, the earthquake in Haiti, and more recently the damage caused to the Bahamas by Hurricane Dorian. Dr. Njoroge said that while there was support for both countries in the immediate aftermath of the two crises, there was no follow through and things have not finished.

The kenyan official admitted being truly honest in saying how delightful he was when upon arriving in Barbados to read about the support this country had pledged to the Bahamas.