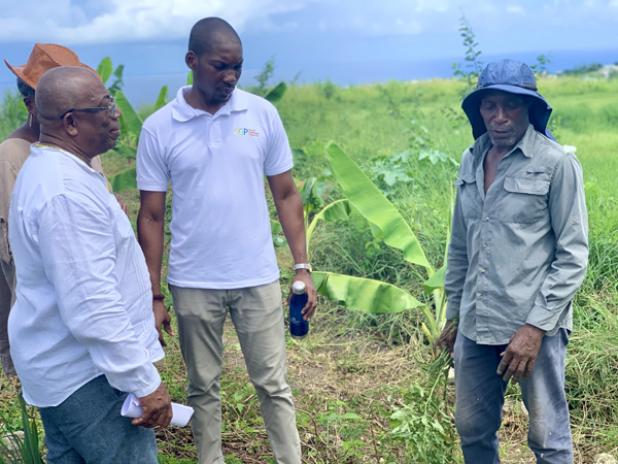 FROM LEFT: Minister of Environment and National Beautification, Trevor Prescod, and David Bynoe, National Coordinator of the Small Grants Programme as they listened intently to what this farmer had to say about the benefits of the plants grown.

Codrington College and the University of the West Indies, Cave Hill Campus have embarked on a project to document, preserve and cultivate medicinal plants that were historically and currently used to treat ailments in Barbados.

David Bynoe, National Coordinator of the GEF Small Grants Programme, believes that the success of this project could bring about a reduction in the high health bill in this
country.

“This is one project that we are very proud of, because it hit some very key indicators at the global level, but also very important at the national level as well. We know we have some serious challenges in Barbados with non-communicable diseases, yet we have a strong history of people living to become centenarians, and we believe that is linked with some of the local knowledge that they were able to apply; and this initiative taps into that local knowledge and some of the medicinal herbs that they would have used and contributed to their longevity,” he said.

“Because of our NCDs [non-communicable diseases] we have a high health bill, and most of that is not only comprised with treating NCDs, but also the cost of importing medications and other things to support health that are not produced and manufactured in Barbados.”

He explained that in addition to identifying and producing these plants that have medicinal value such as lemongrass, blue vervain and aloe vera, the project also sought to lay out and develop two kilometres of land at College, St. John into an arboretum, which included clearing and pathways, in six months.

He stated that this hiking trail to the arboretum allowed for not only exercise, but the opportunity to educate persons on the medicinal value of plants that grew around them.

Dr. Damian Cohall of the UWI believes that this project – which received US $47 500 in funding from the GEF SGP – is an opportunity for Barbados to explore medicinal plants and harness the medicine components to infuse them in dietary supplements. For example, with the lemongrass and blue vervain, Cohall said they are currently seeking ways to package it nicely into tea bags to be used for retail, so that those who grow these plants in their gardens will be able to have a small source of income.