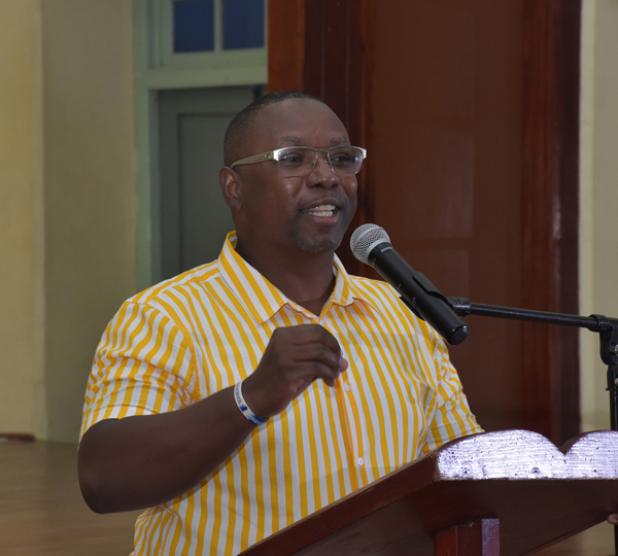 Fourth Vice President of the Democratic Labour Party (DLP) and the Party’s spokesperson on agriculture and environment, Andre Worrell.

There is concern that the Land Acquisition Act is not being used as it is meant to, in respect the acquisition of land for the Hyatt project.

The issue was put on the table Sunday night by Fourth Vice President of the Democratic Labour Party (DLP) and the Party’s spokesperson on agriculture and environment, Andre Worrell.

He was speaking at a Democratic Labour Party (DLP) public meeting held at The St. Michael School.

Worrell said it is interesting that the Barbados Labour Party is now in favour of the project and making efforts to facilitate it, when it vehemently
opposed construction of the hotel when it was in Opposition.

“When they were in Opposition there was nothing good they could say about the Hyatt project… but now all of sudden they had their Damascus moment and now that is the next best thing in Barbados, that they are willing to go out of their way… to take away land forcefully from a citizen of Barbados, just so that another citizen or corporate entity in Barbados would benefit,” he said.

He continued, “That was not the way or what was intended of how the Land Acquisition Act is supposed to be used. Up to this day we are still trying to figure out what is the public purpose that the administration has identified in order for them to use that legislation as the tool and the mechanism in which to take away that land from the Liquidation Centre.”

Worrell maintained that through this action, Government is “inflicting hardship” on people, as many of those employed at the store operating from the building on that property – which is owned by local businesswoman Asha Ram Mirchandani – are likely to be out of a job once the store closes.

“They are behaving as though people don’t work there. That is a company that is employing people, so you’re going to shut it down and I imagine when she closes, those people will have to go home. So you’re sending home persons with no concern. She has a legitimate argument in that you are looking to jeopardise one business to advantage another and those things cannot be fair,” he maintained.

The former senator, adamant that to whom much is given, much is expected, further maintained that the Barbados Labour Party, with the overwhelming majority in the House of Assembly, needs to be reasonable and transparent with the people.