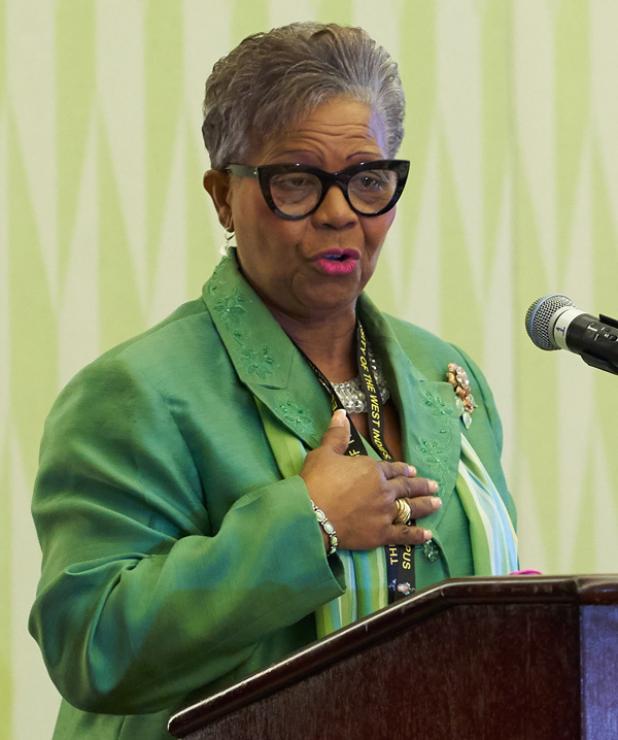 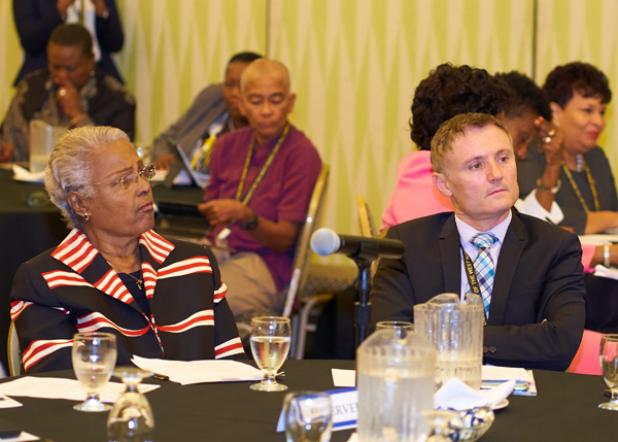 Dame Billie Miller and Didier Trebucq, UN Resident Co-ordinator for Barbados and the OECS, were also present for the opening of the talks.

After 25 years since the original World Conference on Women held in Beijing, governments from around the globe have made massive strides in the pursuit of gender equality laws and initiatives for their citizens. Though much work has been done, much more needs to be carried out if we are to see a more permanent change in reaching full gender equality.

This comes from Minister of People Empowerment and Elder Affairs, Cynthia Forde, as she addressed the opening of a two-day meeting at the Hilton Barbados, on accelerated action for Gender Equality here in the Caribbean. The talks, entitled ‘Building a co-ordinated position for Caribbean negotiations on Beijing +25’, saw dignitaries and representatives from parliaments, ministries, national gender machinery, multilaterals, civil society and other organisations from around the region taking part in spirited discussions on the issues women and girls currently face within this part of the hemisphere and other nations.

Minister Forde, who was also a part of the delegation that was involved in the 1995 Beijing conference, spoke of the importance of continuing in the work that was done so far by world governments, into creating a fair and just society for all.

“Twenty-five years later, we have been able to witness the changes in women’s rights. However, it is incumbent upon all of us, both male and female, to continue in the vanguard and renew efforts to be bold, inclusive and intergenerational in every sphere of life. We must pass onto our girls and men if we are to achieve those values that were set forward,” she said.

It was her belief that as the world continues to change its approach to all current issues, those in discussion about gender equality must also be flexible in their approach and encourage new fresh ideas.

“Our world is fast changing, and when we reflect on 1995, and compare the massive changes between then and now, we must continue to plan purposefully as we witness the challenges across the world compared to then when we all met in China. Never in our wildest dreams did we anticipate infanticide, domestic violence, deprivation of our girls from educational advancement, with some of them being put into slavery and prostitution. There have been some retrograde steps taken during that period that we never contemplated. These unfolding actions of discrimination and stigma, as well as deprivation of women and girls, have really been a terrible backlash in our hard-fought battles,” Minister Forde revealed.

Though some areas have seen a step back in efforts, Minister Forde is confident that the renewed interest towards equality within the workplace, health sector, and wider financial markets will encourage more progress in the next following months from world leaders, as the United Nations (UN) seeks to push more modern thinking and recommendations in all sectors.

At the end of this conference, it was expected that participants would gain a consensus of future steps to be taken that will be brought forth at the upcoming 64th session of the Commission on the Status of Women in March 2020 and the UN Women Gender Equality Forums in May and July.