Six-year-old, Saniyah Olliviere receives a Christmas gift from the Governor General of Barbados, His Excellency Sir Elliott Belgrave on his annual visit to the Queen Elizabeth Hospital (QEH). Looking on is the Chairman of the QEH Board of Management, Joseph King. 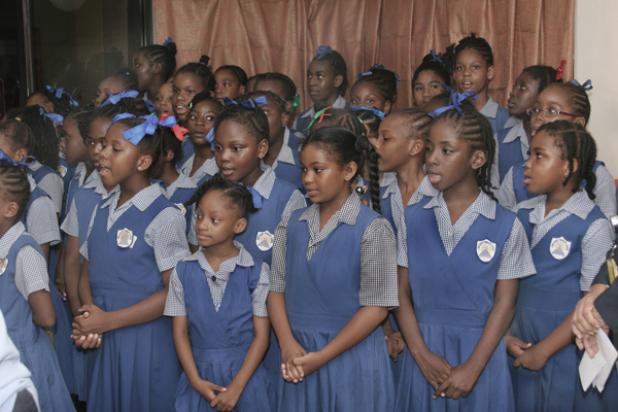 Sat, 12/10/2016 - 12:00am
By:
Patricia Thangaraj
The Governor General of Barbados, His Excellency Sir Elliott Belgrave had a jolly time yesterday as he sat in the Doctor’s entrance of the Queen Elizabeth Hospital (QEH), where he visited with some of the young patients of the Paediatric Department.
Speaking with The Barbados Advocate on Thursday evening after the Governor General’s annual visit to the Queen Elizabeth Hospital, the Head of the Paediatric Department, Dr. Clyde Cave said that usually the Governor General tours the Paediatric ward. However, because of infection control reasons this time, they decided to hold the event in the lobby, bringing six of the 13 children who are currently patients of the ward down to visit with the Governor General instead. He also stated that the parents of the other seven children came down to receive the gifts to take back up to them.
“The visits are usually held around the same time every year. Traditionally he usually comes up and goes through the Ward, usually along with his wife [Lady Belgrave] who has always had a strong interest in children. We were looking forward to their visit. However, this year because of the conditions of the Ward and certain infectious diseases really, it is probably better not to bring dignitaries through the Paediatric Ward. We have restricted visiting throughout the rest of the year and it just seems in keeping [with policy] to have it in a different format.”
The visit to this Ward is a traditional event that has been done by every Governor General that has ever held office, along with his wife, and these visits have always been well-received by the young patients and their respective parents as it makes them feel important. The fact that they are held around Christmas is especially heartwarming since "this is the season for sharing and caring," said Dr. Cave.
He continued, “Christmas is a time of joy and peace. Of course there will always be those among us who are going through illnesses and can’t partake of the season. So it is very good for sick children to be remembered at this time of the year.”
The Paediatric Ward which caters to children from newborns to 16 years of age, while the age range of the children who visited with Sir Belgrave were from babies, a few months old, to 13 years old.