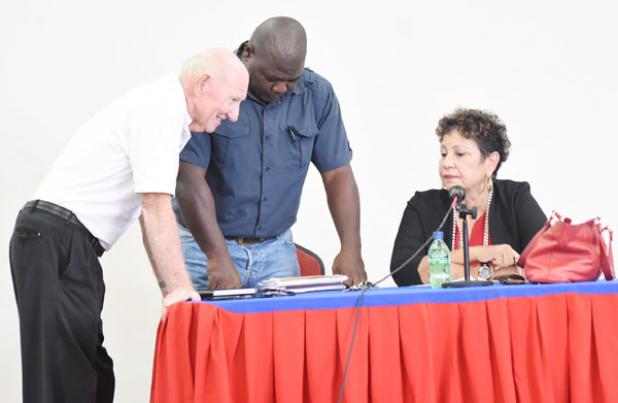 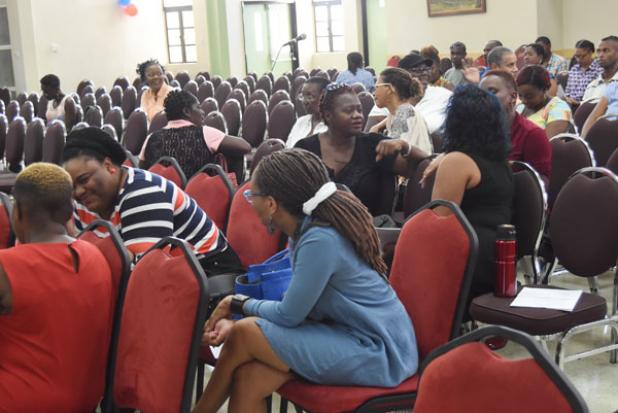 Some of the teachers in attendance at the meeting.

Thu, 09/08/2016 - 12:00am
Redman: Put guidance counsellors in all schools
President of the Barbados Secondary Teachers’ Union (BSTU), Mary-Anne Redman, believes strongly that steps should be taken to place guidance counsellors in all schools across this island.
Speaking to the media after a more than three-hour meeting yesterday afternoon with the general membership of the BSTU at Solidarity House, Redman, noting that one of the issues addressed on their agenda was the violence in schools, said that they feel confident that guidance counsellors and similar professionals can help put a stop to violence within the school setting and address the myriad issues facing children and adolescents in this country. Adamant that the BSTU stands by its zero tolerance policy towards any form of violence in the school environment, she maintained that they will not allow their members to suffer at the hands of any students.
“For years we have been saying there is a need for guidance counsellors at the primary levels, because students don’t come to the secondary schools and develop problems there, they have behavioural problems starting from the primary system… At the secondary school, I would say we need more than one guidance counsellor in schools [and] we need social workers working with the guidance counsellors,” she insisted.
Redman added, “One psychologist cannot fulfil the needs of the tens of thousands of students in this country. We need to have psychologists who will deal with the many problems that our students have.”
The BSTU head maintained that such professional help is necessary as teachers are not trained nor do they have the resources in the classrooms to effectively deal with the “special needs” of students, especially in classrooms where the student roll can be in the high 30s.
Reflecting then on the major violent incidents that involved teachers and students which occurred last academic year, the union boss said that in the case of Ellerslie where a teacher and student were involved in an altercation, the teacher remains on sick leave; while at the Lodge School two students who had confrontations with teachers have been recommended for transfer to other schools. In respect of the teacher whose car was vandalism to the tune of $11 000, he was transferred to another school pending investigations.
Redman said it would appear that those investigations have not yet been completed as the teacher will not be returning to his original post on Monday.
Her comments came as she indicated that each teacher at yesterday’s meeting was furnished with a handout on how teachers should approach situations of conflict. That seven-point document, a copy of which
was provided to the media, advises teachers not to question; argue; lecture, scold or yell; give false praise; hold a grudge; lose their cool or ignore misbehaviour.
She added that a planned session on self defence did not take place due to the instructor’s unavailability, but they hope to expose their members to such a session in the near future so they can protect themselves and the students in their care. (JRT)