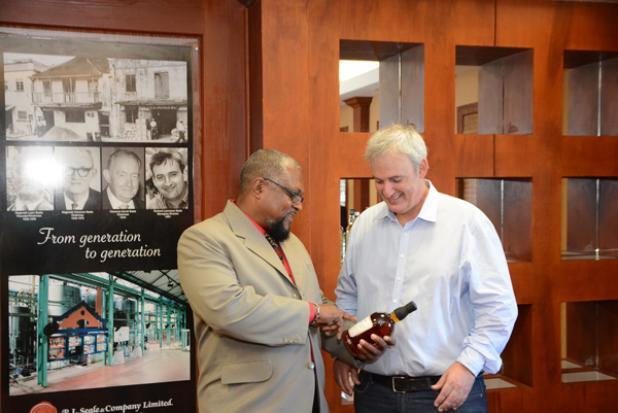 For the third successive year, Foursquare Rum Distillery has won the Rum Producer of the Year Award.

At the International Spirits Challenge (ISC), the Distillery also brought home the top award in the Supreme Champion Spirit category – the first time in the history of the 23-year-old competition that a rum has won the prestigious award with it vintage Foursquare 2005.

The event, which is seen by many spirits producers as the international standard for quality and excellence saw 1 600 entries from nearly 70 countries worldwide competing in various categories.

During a tour of the St. Philip facility on Friday afternoon, Managing Director of the distillery Richard Seale therefore highlighted the need for a thriving sugar cane industry.

Commending the facility on its success, Minister of Agriculture Indar Weir stated that its success indicated the value of the island’s rum industry.

“We look to the rum industry with not only a high degree of hope, but a perfect example of what can happen in a country as small as Barbados… I have been told repeatedly across Barbados and indeed sometimes in the press that there is no place for sugar and that there is no place for a sugar industry. Well I am happy to tell you all that Mr. Richard Seale has dispelled that myth today, because he himself told me that there is an absolute need to continue with a sugar cane industry, which is what we have been saying all along,” he said.