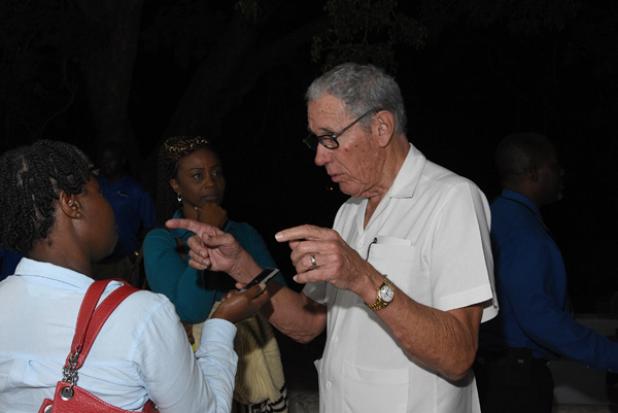 BARBADOS stands to gain significantly more foreign exchange from the sale of some of the desalinated water being produced on the island.

This was highlighted recently by founder and Chairman of Williams Industries Inc. Ralph “Bizzy” Williams, who explained that at present cruise ships visiting our shores purchase water for five times more than what it is purchased by the Barbados Water Authority.

He was speaking to The Barbados Advocate as the process to expand the Spring Garden Reverse Osmosis Plant by William’s Industries subsidiary Ionics Freshwater Ltd, reached the level of a Town Hall meeting. At that time residents saw details of the plans for the expansion, including an Environmental Impact Assessment conducted on the site and its environs. They were given the opportunity to voice any concerns, all of which are the steps before approval can be granted by the Town Planning Department.

It was noted during the meeting that even though most cruise ships have facilities to desalinate their own water on board, they prefer to purchase water from Barbados, primarily because of its quality.

“The cruise ships pay in US dollars. So it is obvious that if you could expand the plant even more you could make a lot of money in foreign exchange,” the business magnate stated.

This he said would hopefully be followed by a photovoltaic array to power such a facility noting that the power source for the plant would also be a critical consideration.

Currently the plant produces 30 000 cubic metres per day. With the expansion, the plant will be able to produce another 15 000. It will include six new abstraction wells to the well field, which is the area north of the present plant and adding one train of reverse osmosis membranes. Also included on the site will be a 1.22 million gallon capacity storage tank, three pumps that will be used to transfer the potable water from the storage tank to the BWA water system; an electrical transformer and an expanded electrical distribution room.

Making a case for a need for reserve capacity, it was noted that some parts of the island experienced drought outages for a period of up to nine months. This was exacerbated by the fact that the drought severely reduced the available groundwater on which the island is heavily dependent. Prior to this, the available groundwater resources were already almost entirely exploited with little or no reserve capacity.

The desalination facility is capable of supplying drinking water to approximately 20 per cent of the population of Barbados. The feed water source is from ten brackish water wells. The plant utilises ultra-low pressure brackish water reverse osmosis membranes and energy recovery turbines both of which helps to optimise the overall energy requirements of the system.

After post-treatment the potable water is directed to a site storage tank where it is constantly monitored for water quality and is then transferred to the water authority reservoir for distribution.