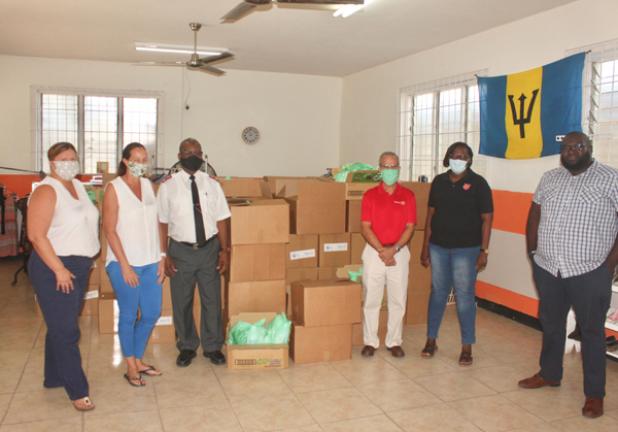 A joint initiative between COVID-19 Essentials Food Drive, Rotary Club of Barbados and the Salvation Army will now be seeing up to 1 800 vulnerable persons assisted weekly under the current climate of the COVID-19 pandemic. After the programme got off the ground around the middle of April with donations of 200 boxes of food a week, the drive has been expanded and doubled since last week with 400 boxes going to those in need each week.

With The Barbados Advocate conducting a visit to the Salvation Army’s Reed Street headquarters yesterday, it was revealed by Rotary Club of Barbados’ President, Peter Williams, that the decision was taken touse the Army’s electronic database of clients to run the programme through.

“The Salvation Army has the distribution systems already and we could not ever hope to replicate it and do it as efficiently as they do. I think it has been a wonderful partnership that has taken place,” he said.

Monique Archer, who serves as Chairperson of the COVID-19 Essentials Food Drive, conceptualised the idea for the programme and echoed the sentiments of Williams, stating that the Army gave her idea a betterguidance and direction. “I knew that I wanted to do this quite strongly and I knew that I had a lot of good people that would join the team and they did, but I didn’t have a clue how to distribute these boxes of food and I didn’t know how to qualify who was in need or had a greater need over someone else and I didn’t want to make that decision anyway. These guys (the Salvation Army) are accustomed to making those types of decisions and evaluating, and they have processes to go through and see what people’s needs are. And it has been good to know that someonetrustworthy and experienced is handling it,” she said.

Under the model of the programme that kicked off in April, only families in St. Michael, Christ Church, St. Peter, St. Lucy, St. James and St. Philip – parishes with Salvation Army centres – were able toreceive assistance. However, under the new model, households in every parish have been registered to receive boxes of food.

Salvation Army’s Disaster Management Coordinator, Mark Kellman, said that the pandemic had seen an unprecedented situation taking over in Barbados with many persons now in tremendous need.

We have a lot of persons who have been laid off, especially people from the hotel industry. A lot of persons like managers, custodians, bartenders have all been laid off, so they have come asking us if there is any food or any way we can help – no matter what. We evenhave requests from parents asking if we can help with tablets, so the Army has been trying to assist in any way we can.”

Business Manager and Public Relations Officer, Sherma Evelyn, sang the praises of the programme as it allowed them to augment the efforts they were previously making by themselves.

“When they came onboard with us, we were doing about five a day or six a day and our supplies had almost depleted. We started to call on some of the companies in corporate Barbados who usually give us and they themselves were also bombarded for donations. So I must say that the collaboration, the partnership has really satisfied a lot of the need,” she said, before going on to add that most clients were on a two-week rotation for receipt of their boxes. She also stated that with persons going back out to work under Government’s phased reopening, persons were being taken off the programme when they received their first payment, opening up space to ease the backlog of other persons in need.

Highlighting the fact that the programme was being kept afloat by the generous donation of funds and the donations of products and concessions and discounts from vendors and service providers, Archer urged members of the public who were able to, to help those who could not help themselves.

“Any donation helps, but the fact is that it costs $60,000 a week to function. Every basket of food carries a wholesale value of $150. We actually did the exercise and priced it up based on the supermarket prices and the basket of food out of a supermarket would cost you $300. So the fact that we can do it for $150, just means that we can feed twice as many people.”

With the Rotary Club of Barbados’ Facebook page open for persons seeking to donate or seeking assistance, it was noted by the Food Drive’s Project Manager, Jennifer Juman, that at their current capacity, their funds would take the programme only to the end of June.

“We raised 500,000 and that covers about 10 weeks. Ideally, we would like to raise another half a million. So the corporations that haven’t donated to any other cause yet who have the funds, this is a great place and a great way to lend a helping hand to the people of Barbados,” she said. (MP)