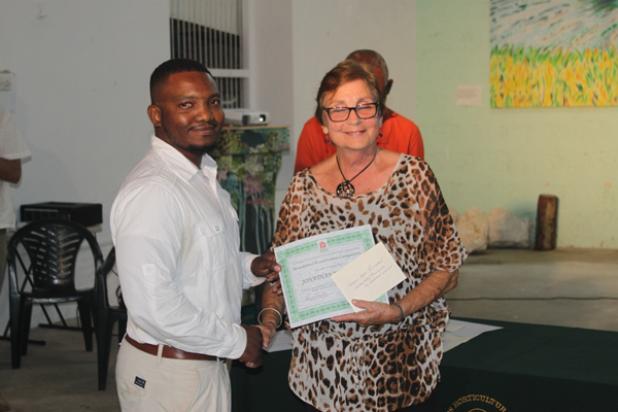 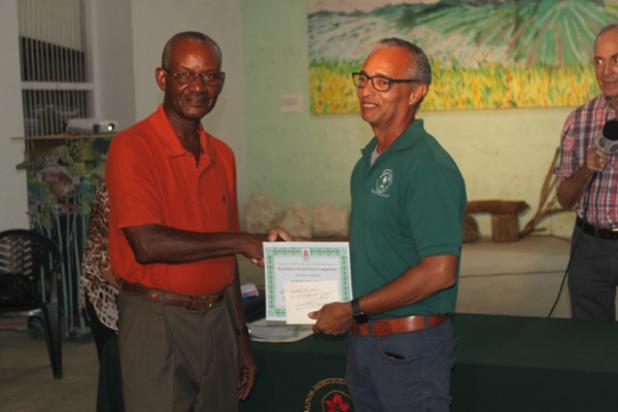 Russell Corrie, Director of Nature Care, which maintains the Warrens roundabout, accepting his prize from the President of the Barbados Horticultural Society, Orson Daisley.

THE Norman Niles and the Life of Barbados roundabouts are Barbados’ ‘Most Attractive Roundabouts’.

This announcement was made last Friday when the winners of the inaugural Barbados Horticultural Society’s (BHS) Roundabout Beautification Competition were revealed.

Other winning traffic circles included: The Warrens Roundabout and the St. Lucy’s Church Roundabout, which tied for the prize of ‘Best Use Of Drought Tolerant Plants’. Meanwhile, the prize for ‘Most Colourful Urban Roundabout’ went to the Nita Barrow Roundabout.

Both the sponsors and the individuals responsible for the upkeep of traffic circles were awarded during last Friday’s ceremony.

BHS’ contest was judged on April 5th, and it was funded by the Peter Moore’s Trust. Competition participants were marked in four categories, and these were: Use of drought tolerant plants to increase the sustainability of the landscaping, diversity of plants, attractiveness of design and general condition or health of plants.

Though expressing disappointment at the level of interest shown in the competition, Second Vice-President of the BHS, Dr. Frances Chandler, said she is hopeful that the contest has simulated more interest in the upkeep of the roundabouts across the island. She also shared her hope that it would encourage sponsorship of those traffic circles which are not sponsored. (MG)