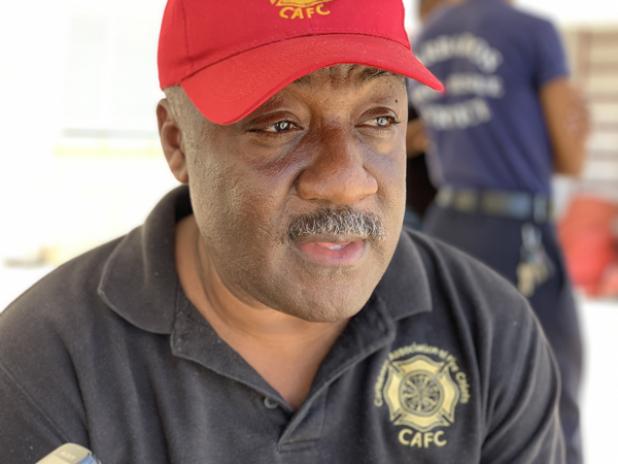 Chief Fire Officer, Earl Maynard as he was interviewed.

Firefighters across the region gather for conference

Firefighters from across the region and Barbados gathered together for a day of activities, culminating the CAFC conference that took place this week.

Coordinator of the Conference, Marcelleno Ventura told The Barbados Advocate that they gathered at the Arch Hall Fire Station yesterday for the firefighter challenge; where six competitors from Barbados, Dominica, Antigua and St. Lucia went through various stages in the competition.

The firefighters were made to go through an obstacle course that tested the firemen’s technique and endurance as they competed against each other for the best possible time.

Ventura noted that the winners of yesterday’s challenge would go on to compete in Puerto Rico.

President of CAFC, Fire Chief Earl Maynard, revealed that following the obstacle course, there was an EMS Challenge where paramedics from the Barbados Ambulance Service, as well as members from Antigua and Guyana, would be demonstrating how quickly they would be able to stabilise a victim.

Maynard went on to note that they had a successful conference, adding that one thing they really aimed to do was meet with entities in the region such as RSS and CDEMA, to form a relationship.

He revealed that they had a business meeting on Tuesday in which the organisations involved made a commitment to have formal discussions. Maynard expressed that this was a positive step in the right direction as he hoped for a more stable relationship through a MOU.

“CAFC has a strategic plan and we are looking to form more resilience among the region in that we are trying to look at common standards among the region for firefighters, EMS and Rescue and once we have that, then we can be assured that when someone leaves Barbados and goes to Dominica then they would be adequately trained or trained just as well as the natives,” he said.