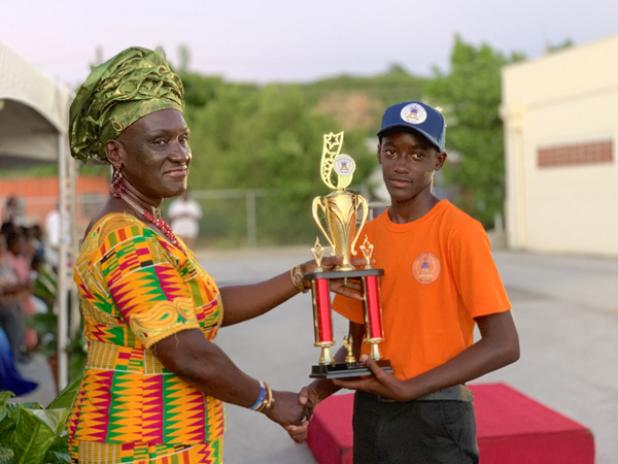 Guest speaker, Beverly Parris (left) as she awarded Fire Cadet Makai Yearwood with a trophy for being the Best Overall Cadet.

After six weeks of training it was clear that the Fire Cadet Programme was one that was beneficial in the development of young people.

Speaking during the graduation ceremony that took place at the Arch Hall Fire Station Friday evening, Acting Station Officer, Marlon Small described the programme as beneficial to the positive development of young people.
He noted that a new element called a “Sleep In”, was introduced into the programme last year, where the cadets stayed in from Thursday to Saturday and got the opportunity to experience what it felt like to be a real fire officer

“From all reports, it is believed that this sleep in should become a fixed part of this programme,” he said.

As he spoke to the cadets, Chief Fire Officer, Errol Maynard, commended them for reaching the end of a six-week life changing experience.

“I commend those of you who have made it to the end successfully, you can now move on to the next stage,” he said.

“We in the Barbados Fire Service and specifically through this programme, want to build strong children, children strong in character, strong in morals, strong values and strong in their decision-making capacity. Strong children grow up to be strong men and women and contribute to forming strong communities.

“Through the cadet programme, the fire service has given you some more building blocks to work with, you have been taught team building, fire and life safety, ropes and knots among other things; these new and enhanced skills are not separated from what you already have, but rather they are meant to adhere to your developing tool kit and support what you ought to have had from at home, school and church. You need the influence from all of the institutions to be able to develop what God wants you to be.”

The Fire Chief noted that at the Fire Station they were not solely responsible for saving persons from the ravage of fire or an emergency, but they were also there to aid in the positive nation building, as they aimed to help prepare men and women for the community, and based on the results, he was proud to note that they had achieved such with this cadre of fire cadets. (CLF)