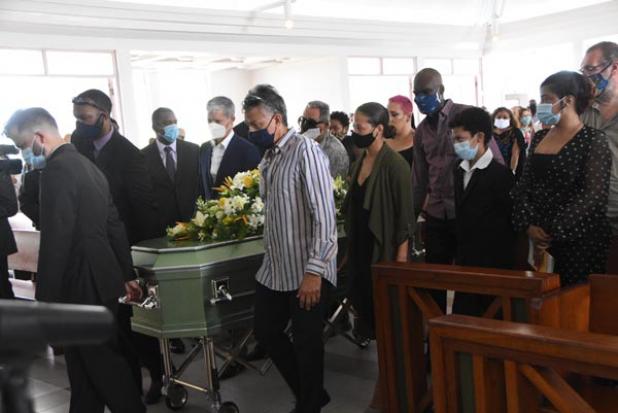 Pallbearers escort the casket carrying the body of the late Patrick Hoyos into the Chapel for the service of celebration.

Family, friends and colleagues turned out in their numbers yesterday to pay their last respects to veteran journalist and publisher, Patrick Ricardo ‘Pat’ Hoyos.

The life and achievements of Hoyos, who passed away on July 1 at the age of 67 after a short battle with cancer, were remembered during a service of celebration held at the Chapel of the Coral Ridge Memorial Gardens where Prime Minister Mia Amor Mottley, several Ministers of Government and members of the business community were among those gathered.

While widely known for his journalistic prowess, his best friend Tony Cumberbatch noted that Hoyos was also a talented artist and musician. Delivering the first of two eulogies, Cumberbatch spoke glowingly of the man he dubbed his “little brother”, who he first met when they both were employed at The Barbados Advocate. It was Hoyos, Cumberbatch explained, that was instrumental in changing the format of the newspaper from broadsheet to tabloid and introduced new publications to the media house.

His friend of 35 years explained that on leaving The Barbados Advocate, Hoyos returned to the “comfort” of Hoyos Publishing, where he would bring to life new publications, the likes of The Broad Street Journal and Who’s Who in Barbados Business – both “standards of excellence on the local business landscape”.

“Pat himself became the business guru, not only in Barbados but across the Caribbean – the one everybody turned to for information or analysis on anything from balance sheets, to start-ups to conglomerates,” he said.

Cumberbatch added, “As a journalist, Pat was not afraid to ask the hard questions. If you didn’t like it, the follow-up was even harder. Neither did he hesitate to speak his mind; he would let you know exactly what he thought – be you his peer or the CEO of a large and powerful company.”

He went further, speaking of Hoyos’ kindness and generosity to friends and staff. Cumberbatch added that the “family man” was devoted to his children, grandchildren and wife Sophie.

Friend and media executive, Vic Fernandes, also reminisced Hoyos, who he called the “maverick”. Delivering the second eulogy, Fernandes said that he and his friend from childhood, thought of the need to regulate the re-lationship between the media and the advertisers and with the help of the late Sir Fred Gollop, formed the Media Association of Barbados – with Fernandes as President and Hoyos as Vice President.

Fernandes also spoke of Hoyos’ stint as the host of ‘Down to Brass Tacks’. Fernandes, quoting Dennis Johnson who was his producer on the show, noted that Hoyos, while on the show, always maintained balance despite “intense pressure” from the “professional talk show agitators”.

“Never, never in my wildest dreams would I have thought that I would be one day standing at a mic in Coral Ridge paying tribute to a man I loved and respected for his intellect, his work, his work ethic and his great friendship,” Fernandes said.

There were also tributes in song delivered by his daughter Mandy Cummins, Operation Triple Threat, Tamara Marshall and Alan Sheppard.