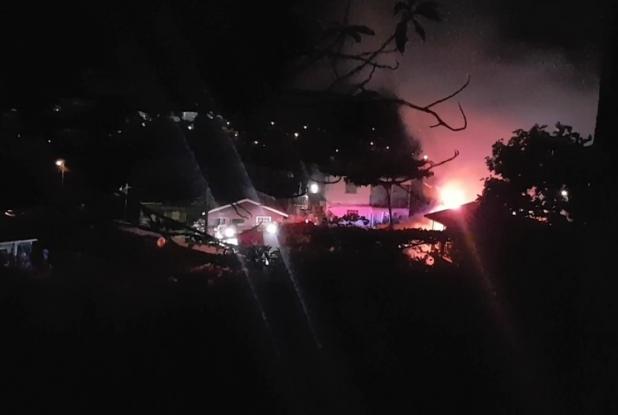 The residents of St. Stephen’s Hill, Black Rock were aroused from their beds early Sunday
morning when they heard fire responders from the Barbados Fire Service (BFS) battling a house fire in the densely populated Phillips Road community.

It was 12:30 am yesterday when two fire trucks of the Barbados Fire Service (BFS) responded to a house blaze in the quiet community of St. Stephen’s Hill, Black Rock, St. Michael.

The Barbados Advocate spoke to an eyewitness who was awakened by the loud sirens and flashing lights and saw the fire from her yard. Other neighbours, some with their blankets and hoodies, came out on their lawns to see what was happening.

The fire could have potentially caused more damage if the fire responders had not acted quickly.

The house, located in the densely populated Phillips Road neighbourhood, accommodated 17 family members and included six children ages one to fifteen. The police indicated that part of the residence, a wood and wall house, was destroyed and the rest of the house had water damage.

Three fire trucks responded to the inferno with two appearing at 12:30 am and the third coming to the scene at about 2:30 am.

The Member of Parliament for  St. Michael North and Minister of Industry and International Business, Ronald Toppin, acknowledged that the house fire  is a tragedy, but said help is on the way.

Yesterday, he said that he had contacted the Ministry of Housing and Minister Cynthia Forde from the Ministry of People Empowerment and Elder Affairs. Toppin was assured they are working on the matter to provide accommodation to the affected family by the end of the day (yesterday).

The politician noted that there has been a greater challenge due to several house fires in recent times, but indicated that an officer is expected to visit the family and he has also heard and responded to their needs.

“It is very sad; at least they have their lives and they are grateful for that, but at the same time they have some other challenges,” Toppin said.