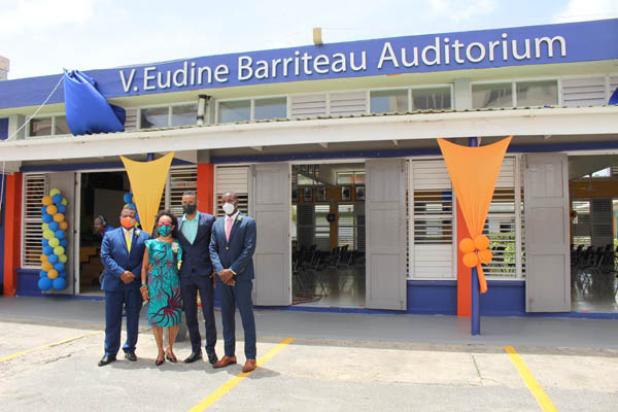 Lady of the moment, Professor the Most Honourable Eudine Barriteau (second left) standing by the sign at The Ellerslie School that carries her name. She is joined for the photograph by her son, Cabral Barriteau-Foster (third left), Principal of The Ellerslie School, Lt Col. Errol Brathwaite (left) and Parliamentary Secretary in the Ministry of Education, Technological and Vocational Training, Senator Dr. Romel Springer. 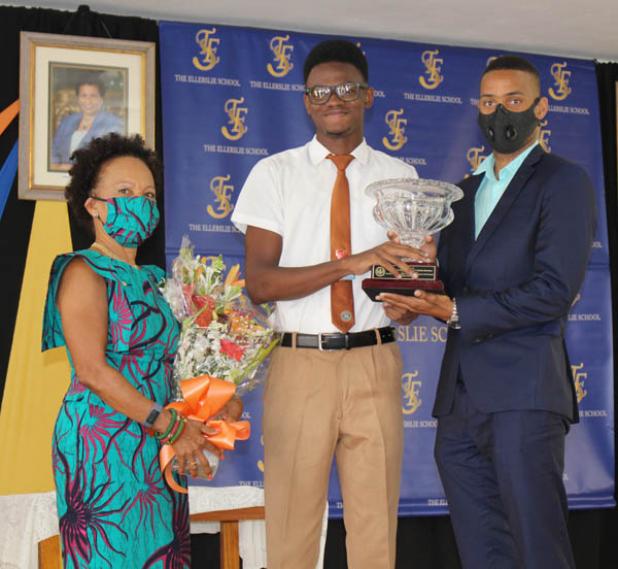 Head Boy of The Ellerslie School, Miguel Nicholas (centre) making a presentation to Professor the Most Honourable Eudine Barriteau who is assisted in accepting it by her son, Cabral Barriteau-Foster.

The Ellerslie School honours one of its own

The Ellerslie School’s hall has been named the V. Eudine Barriteau Auditorium.

This occurred on Friday during a naming ceremony at the school. It was in recognition of the outstanding achievements made by past student, Professor the Most Honourable Eudine Barriteau who is the Pro Vice Chancellor and Principal of The University West Indies (UWI), Cave Hill Campus.

The day’s event including a plaque unveiling and the unveiling of the sign indicating the auditorium’s name. The occasion was attended by several diplomats as well as by Education Minister, Santia Bradshaw and Member of Parliament for St. Michael North West, Neil Rowe.

In her address, Bradshaw congratulated Professor Barriteau, who attended the then Ellerslie Comprehensive School from 1968 to 1972.

“You have created a remarkable legacy for fellow Ellerslie students to follow, in particular, the young women as well who attend this institution and who left this institution. Certainly, you are amongst the trailblazers of the women who have certainly broken the glass ceiling for all us and indeed we are very, very proud of you.”

She encouraged the school’s current pupils to “take heed of the example set by Professor Barriteau and keep pushing those boundaries to achieve success beyond your imagination.”

Remarks during the ceremony were additionally given by Principal of  The Ellerslie School, Lt Col. Errol Brathwaite and past Head Boy of the school and friend of the Professor, Alfred Hoyte.

In her thank-you address, lady of the moment, Professor Barriteau spoke fondly of her time at secondary school describing it as “one of the most rewarding phases of my life.” She said she was “exceedingly happy to be at Ellerslie, as far as I was concerned, I was in paradise.”

She thanked everyone who made the occasion possible and those at the helm of her alma mater for deciding to honour her. She said it is “an experience that is simultaneously exhilarating and humbling.”