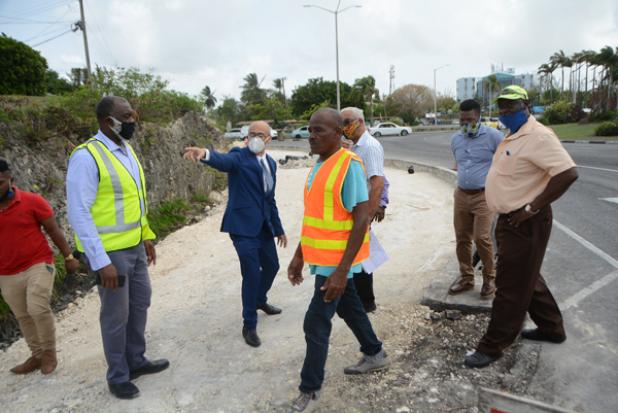 Come September, motorists seeking to make their way from Graeme Hall to Upper Rendezvous will have an easier time doing so.

This as the Ministry of Public Works and Transport is working on the creation of a slip lane to reduce the long lines of slow-moving traffic, which the area has become well known for in the morning hours.

Speaking to the media while on-site yesterday, Transport Minister and MP for the area Dr. William Duguid pointed out that no longer would motorists approaching the Garfield Sobers Roundabout add to the circulation in that area, but would now be able to enter the new left hand lane and make their way either straight towards Rendezvous Hill or take up the existing lane to turn right down Fordes Road.

“Essentially, we want to widen the road here in such a way as to make a turning lane and this will give persons the opportunity of, at any time of the day, not to be able to make the right turn onto Fordes Road. We recognise that the Garfield Sobers Roundabout has caused significant congestion, especially in the morning times for many people from Christ Church East Central, and all the other Christ Church constituencies and St. Philip. So we recognise that we had to do something and it is also a part of our Junction Improvement Program,” he stated.

“The point of it is to take people off of the roundabout so as to ease the whole traffic congestion problem we have there,” he continued.

Commending his parliamentary colleague on the work being done to the vital road artery, Christ Church East Central MP and Minister of Youth and Community Empowerment, Adrian Forde said as a responsible government, it looked to respond to the needs of Barbadians.

“This has been a problem over the last 15 years where congestion on mornings and evenings is difficult for persons and causes numerous complaints and I want to say well done to Dr. Duguid and his ministry,” Forde added. (JMB)