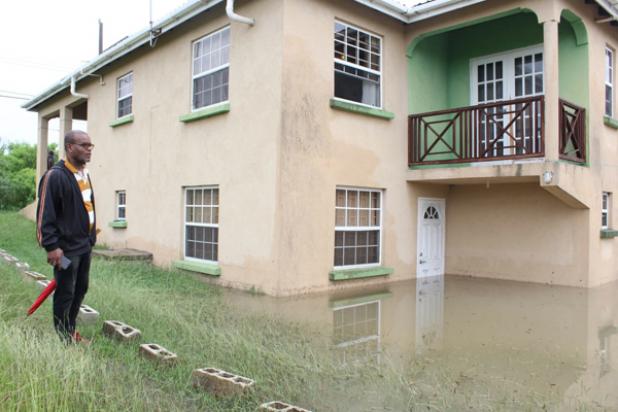 Member of Parliament for St. Lucy, Peter Phillips, assessing some of the flood damage in his constituency yesterday. 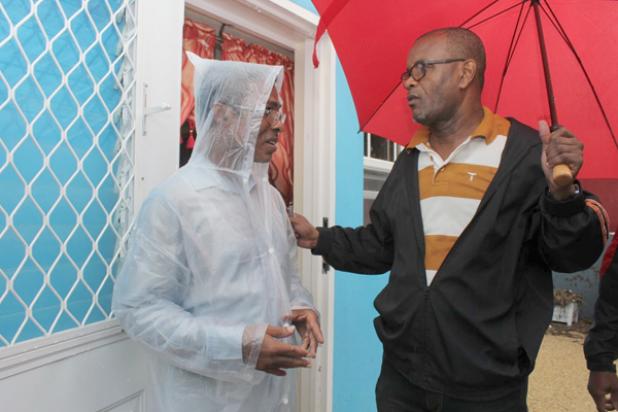 FLOODED homes, impassable roads, stalled cars and raging floodwater as far as the eye could see. This was just part of the reality facing several communities in the north of the island yesterday as a tropical wave passed the island.

In fact, the deluge prompted Director of the Department of Emergency Management, Kerry Hinds, to urge residents to stay indoors and not attempt to traverse the floodwaters. Member of Parliament for St. Lucy and Minister in the Ministry of Transport, Works and Maintenance, Peter Phillips and head of the St. Lucy District Emergency Organisation, Rontae Johnson-Annius, with their teams, visited many of the affected areas to offer assistance where possible. Phillips urged his constituents to check in on the vulnerable members in the community.

Yesterday morning around 9 a.m., the Barbados Meteorological Services issued a flood watch. One hour and a half later, that watch was upgraded to a flood warning, which was put into effect for the island until 5 p.m. A further extension of the flash flood warning was extended until 6 a.m. today.

The excessive rainfall was caused by a westward-moving tropical wave, which generated pockets of moderate to heavy showers, thunderstorms and occasional gusty winds over some sections of Barbados. At that time, rainfall accumulations of 1 to 2 inches were recorded and further accumulations of 2 to 3 inches were anticipated over the watch area. Residents in flash flood-prone areas were told to be on the alert and take necessary precautions.

St. Clements, Bentham’s, Colleton, Bishop’s Road, Greenidges, Hannays and Pie Corner were just a few of the many communities that felt the brunt of the tropical wave. Several videos and eyewitness accounts circulated on social media of the raging floodwater.

A flash flood warning means in this case that flooding due to heavy or excessive rainfall in a short period of time (generally less than six hours) is already occurring within the warning area. The warning maybe updated if conditions warrant.