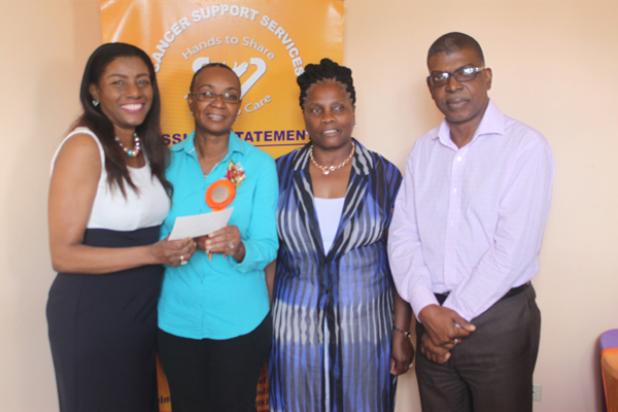 THE Cancer Support Services has received a monetary donation from the St. Laurence Church, which is located in Catford, England.

A cheque in the sum of 2 435 pounds was presented to President of Cancer Support Services, Kathy-Ann Kelly-Springer on Tuesday, by the Church’s Mothers’ Union Leader, Beverley Lashley.

Lashley stated that the Church’s fund-raising activities begun in June of this year. These activities included cake sales, a sponsor walk and a raffle. Funds were also raised during the Church’s service in celebration of Barbados’ 50th anniversary of Independence on December 4th.

“When we decided to actually do the church service at St. Laurence for the 50th year, I decided that I wanted to support a charity in Barbados. And considering that I have left Barbados 50 years this year, I thought it would be appropriate to raise the money and do something for cancer.

President, Kelly-Springer, thanked the Church and all involved in the fund-raising activities for the kind donation, describing it as “a godsend”.

“I say that it is a godsend because any contribution that we get is a godsend – that is how I see it – and I know that it will be put to good use.”

Adding to this, Public Relations Officer, Antoine Williams stated, “We have realised that over the years we need to have support from all sectors ,both private and public, because the efforts, the needs are increasing and increasing continuously.

“As we go into 2017, our standard programmes obviously will be maintained, but as an organisation focusing on the needs of individuals, I am sure you would recognise that we would want to certainly expand our areas of programming, and any effort at all that is given, both financial and in kind, is welcomed.” (MG)