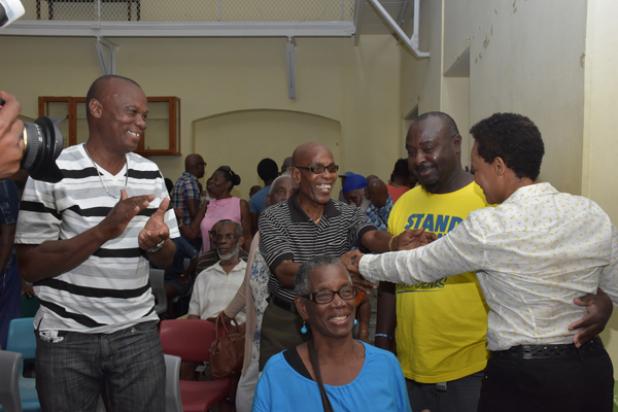 DLP reporting for duty; pledges to be the voice of the people

Leader of the Democratic Labour Party (DLP) Verla De Peiza has pledged that the 64 year-old political institution will never let down Barbadians again.

In a rousing speech on Sunday night during the first public meeting since the party’s crushing defeat at the polls last May, De Peiza acknowledged that there were some things they did wrong when they held the reins of power, and noted that while it has been a rough year for the party, that time has not been wasted, allowing for much needed introspection, which has aided in getting them back on track. And, she made it clear that even as they work on their internal matters, the party will not be abandoning the people of Barbados and is promising to call out the government on any wrongdoings and to stand up for the rights of Barbadians. She made the comments while saying that many hardships have been imposed on Barbadians under the one-year old Government, including an increase in bus fare, increased taxes and overall, a higher cost of living.

Making clear that the DLP was reporting for duty, De Peiza said the “machine is pressing forward” and she expects that even more persons will lend their support going forward. In that vein, she said that the “membership that has fallen away” is welcome to come back without recrimination.

“Thank you for the opportunity of a clean slate to sit back, re-evaluate the position, understand where we are and where our country is at and to start plotting the future of this country. Because, for certain where we stand right now is quicksand in our time sphere. We are being sucked under, but hold your head up, we are on [the] way. The Democratic Labour Party is not satisfied to just watch, we will come to the people and speak on behalf of people.”

Pointing to a number of missteps by the current administration, the attorney maintained that the DLP will not be sitting idly by and keeping quiet. Their goal, she said, is to be the voice of the people. Her remarks came as the former senator added, “If it is one thing that the present administration taught Barbadians when they were in Opposition, is that people power works”.

De Peiza in rallying the troops, also dismissed the impression being given by the Barbados Labour Party Government that the DLP’s time in office is a lost decade, telling the supporters present, they have a duty as “guardians” of the party’s reputation to dispel that untruth. The DLP leader made the point while contending that the foundation for much of what the current administration is implementing was laid under the former government.

“All night long I spoke of things that just simply got coloured differently under this administration, but were born under us… One whole year all we have heard about is a lost decade and then they turn around and do exactly what we did and it is time to call them on it,” she said, with agreement from those gathered. (JRT)