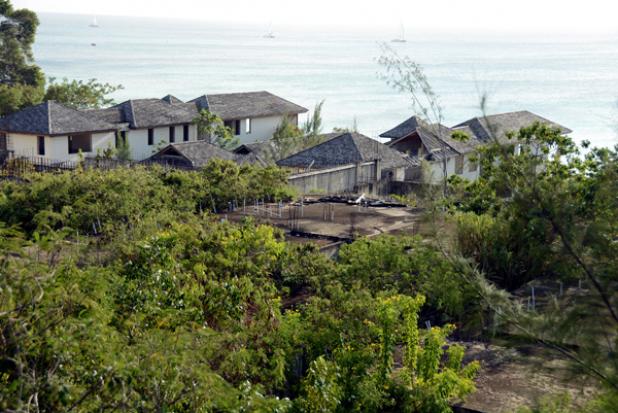 A view of the Four Seasons project.

Diversification push but no apology for tourism growth

Responding to comments made by the President of the Barbados Economic Society (BES) Simon Naitram about the tourism sector being the only sector registering real growth over the last few years, and calling for more diversification, Prime Minister Mia Amor Mottley suggested that plans were in place.

Taking questions in the hot seat at the Barbados Chamber of Commerce and Industry Luncheon, Mottley reminded those present that she had just recently launched the Chefette manufacturing plant.

“This is probably the first manufacturing plant in over a decade and that is to manufacture ice cream and to manufacture burgers and other meat products and that can be sold not just to Chefette and the cruise ships and others and have international certification and also export.”

The Prime Minister also contended that Barbados was a global business concept not only being seen for tourism but also as it relates to cyber security, had been an attractive narrative to global businesses regarding the set up of bases of operations on the island. Some of those international businesses already calling Barbados home are Gildan and Lenstec.

“That is one of the reasons we feel as well that we can have businesses anchoring and moving to Barbados but providing services and goods to Suriname and Guyana with Barbados as the corporate headquarters. That is a multifaceted approach that goes beyond tourism.”

Mottley continued by saying, “We will not apologise for the fact that the government has before it a major set of proposals for hotels and for villas and other things.”

One of the projects Mottley went on to speak about was the Hyatt Ziva Project which is proposed for Carlisle Bay and the Baystreat area. The project has been under significant scrutiny by the public but Mottley announced that she had been in talks about Carlisle Bay becoming a UNESCO World Heritage site as a crescent shaped bay.

The Prime Minister also referenced the commencement of other expected projects such as, the proposed Royalton Luxury Resort in Holetown slated to begin in May 2020 and Hotel Indigo formerly known as the Caribe Hotel.

“With respect to Sam Lord’s Castle, the work has restarted and I have been very grateful and express gratitude to the Chinese government. We explained to them that we did not, could not come up with counterpart funds and in any event were going to sell. The Chinese construction company enlisted the Barbados Tourism Investment Inc for the counterpart funds for that and that project has actually restarted.”

Mottley reminded the forum that the proposals for the sale of Sam Lord’s Castle had closed on January 31st and those offers would be considered at the appropriate time.

Also mentioned were hotels plans which either had no start date or were under review including Paradise (on former Four Seasons site), Sandals Beaches Resort and a 6 star brand hotel at Port Ferdinand, which was at the Town and Country Planning stage.

“As it relates to Beaches, the Attorney General and I would have met with Mr. Stuart (Gordon) late last year. They say that they are anxious to start and they have put in and asked us to note that they have expanded to an additional 66 rooms.”