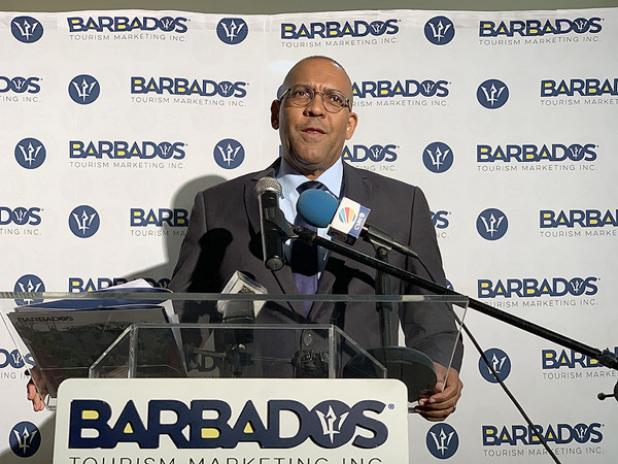 Minister of Tourism, Kerrie Symmonds, as he delivered brief remarks.

After a 15-year hiatus, direct flights from Jamaica to Barbados have returned.

The BW 455 flight, which was flown by Co-pilot Tanisha Clover and Captain Ian Wilson, successfully landed Monday night, after a two and a half hour trip.

Many persons, especially a group of University of the West Indies students who were onboard, spoke to being extremely grateful for this trip, as it replaced the near six hour journey it took to get to and from Jamaica in the past.

Speaking during the press conference following the landing of the aircraft Monday night, Minister of Tourism, Kerrie Symmonds revealed that for the first time in a very long time, the flight will provide 300 seats direct to Jamaica.

He expressed his sincerest gratitude to Caribbean Airlines, as they were able to forge this partnership and reignite the direct flight, he also congratulated the CEO of the Barbados Hotel and Tourism Authority for working hard to achieve this goal.

He stated that this flight highlighted an important issue of connectivity in the region, which was something that was increasingly necessary.

Symmonds believed that the time had come for us to come to terms with the fact that we can only deal with things that we have control over, and noted that the region was one such thing.

He stated that the idea and the ideal of increasing connectivity in the region wherever possible, was necessary.

He went on to report that last year, Barbados saw a 2.7 per cent increase in stayover arrivals, which meant that the Grantley Adams International Airport Inc., welcomed over 600 000 visitors, and specifically, with reference to Jamaica, Barbados saw 9 000 Jamaican arrivals.

“It tells me that we are going in the right direction and that this particular development that we are celebrating this evening, can be useful in helping us to go even further and even faster, and I look forward to there being even better results as a result of this new dimension to the connectivity that we are about to enjoy,” he said.

The flight is expected to operate every Monday and Friday.