Close to 50 students between the age of seven and 15, who graduated from the first-ever Digicel Barbados CoderDojo computer coding and programming last weekend, pose with members of the Digicel family and mentors, including CEO, Conor Looney (right, third row) and COO Nathalie Abrahams (left).

Digicel’s Dwight Grannum (right) passing on vital information to some of the participants as the curtain came down on the final class of the first-ever Digicel Barbados CoderDojo computer coding and programming club. 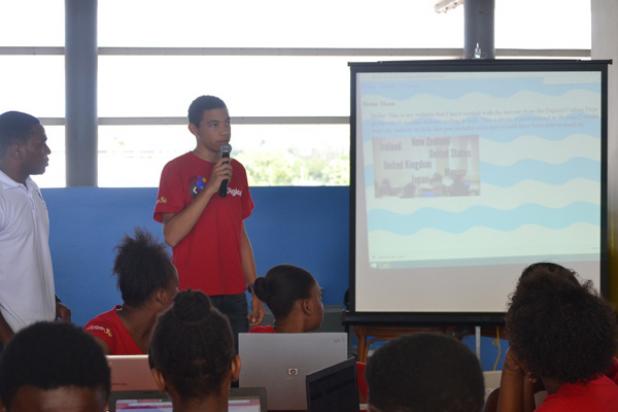 One of the young coders explaining aspects of his website during the first-ever Digicel Barbados CoderDojo computer coding and programming club. 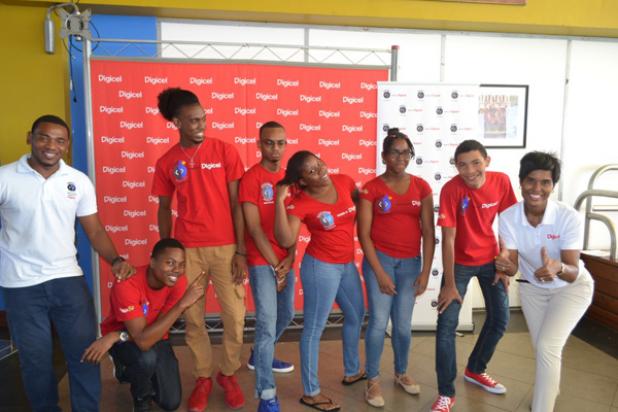 COO Nathalie Abrahams (right) helping some of the participants to unwind after participating in the first-ever Digicel Barbados CoderDojo computer coding and programming club.

The curtain came down this past weekend on the first ever Digicel (Barbados) Limited CoderDojo computer coding and programming club in Barbados. The graduation ceremony for close to 50 children was held at the Kensington Oval.

Ranging in age from seven to 16, participants from schools in Digicel’s immediate Warrens, St. Michael community received their certificates of participation in the initiative geared at gifting new skills, and opening new opportunities in the world of computer coding for young people in Barbados.

CoderDojo clubs are designed to allow children to explore coding in an informal, creative and fun environment. The curriculum included the basics of programming languages, website-building, and app and game design. The course which began late last year, also improved their team work, communication and problem-solving skills.

Addressing the participants, Natalie Abrahams, Chief Operating Officer of Digicel Barbados said, “We are very proud at Digicel to be the local pioneer of such an important initiative. We started our very own CoderDojo in October last year in celebration of our 50th Anniversary of Independence, a time when we focus on all things local and in this case the development of our young people. When we started, there were 1 100 “Dojos” across the world. It is fitting that we have added Barbados to that footprint in our 50th year of Independence, making that number now 1 101.”

Chief Executive Officer of Digicel Barbados, Conor Looney, encouraged other community-centric companies, schools, churches and community groups, to follow Digicel’s lead. “Anyone can avail themselves of the online resources at www.coderdojo.com to host other Dojos locally. The resources are free and it only requires the willingness to invest the time and energy in preparing the next generation for a future where the ability to manipulate technology will not be an option, but a requirement.”

In addition to the certificates and gifts received by every child from Digicel, awards were also conferred on participants who stood out in specific areas, including “Most Engaged”, “Most Diligent” and “Most Creative”.

Those awardees were chosen by the CoderDojo programme mentors, the majority of whom were volunteering Digicel employees, who were joined by choice technology professionals from the private sector and provided the expertise required to teach the coding skills to the students.

CoderDojo is a global community of free coding clubs for young people. Founded in 2011, the Dojos span across 66 countries across the world from Argentina to Australia, from Japan to Samoa, and now thanks to Digicel, in Barbados as well.