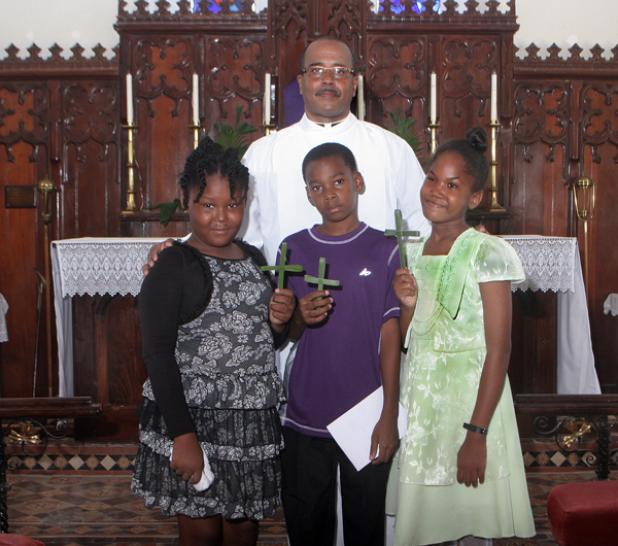 Here these little ones are, eager to receive their palms in the shape of the cross on Palm Sunday.

Tue, 03/22/2016 - 12:00am
By:
Peta Rowe-Forde
Rev. Joseph King of the St. Cyprian’s Anglican Church advised his congregation that a change in attitude is needed, shortly after walking through parts of Belleville and Carrington Village in commemoration of Palm Sunday.
Rev. King told the congregation that changing one’s attitude is not as easy as changing one’s clothes or one’s light bulb; and it cannot be done overnight but it is important that it be done. The result, therefore, from this attitude change should be a Christ-like attitude.
The Reverend described Jesus’ attitude as a caring one. He functioned in the very nature of God; but emptied himself to become a slave so that He could fulfill His mission on earth. Furthermore, Jesus did not exploit his power while on earth and behaved like an ordinary man; this shows that he was humble.
His humility was further seen as he rode into Jerusalem on a donkey. The Reverend pointed out that it could have been a war horse or Jesus could have been on eagle’s wings but instead He opted for a donkey. Moreover, it was said that Jesus’ concern was not to display His power nor was it about himself; but he had an attitude of deep concern for humanity.
Unlike Jesus, humans tend to be concerned about themselves, often carrying a “me first” attitude, according to Rev. King. He expounded that if Jesus had that “me first” attitude we would all be doomed, since the price for our sin would not have been paid. It was also explained that if we fall into and maintain the attitude of selfishness we would still all be doomed.
Luckily, posited the Reverend, Jesus went to die for our self-centred attitudes and we just have to pray that God gives us the strength and wisdom to follow Jesus’ caring attitude.