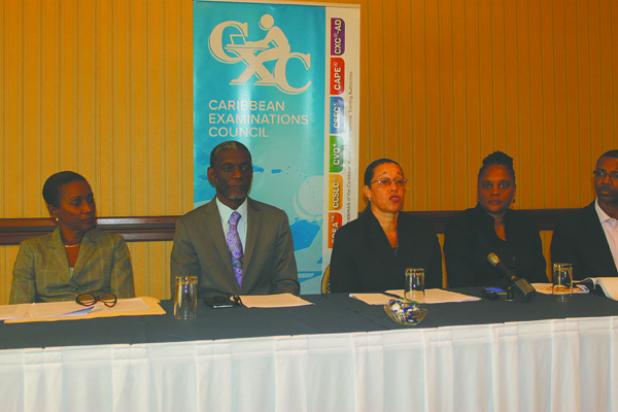 Sun, 12/04/2016 - 12:00am
The falling number of students who are doing history is one area of concern for the Caribbean Examinations Council (CXC).
This was disclosed by CXC Registrar, Glenroy Cumberbatch, who also expressed concern about the number of students entering examinations across the region. Speaking about the latter area, Cumberbatch said, “The numbers are not going as well as they should.
“In CSEC for example, fewer than 21 per cent of those students who are entered or who are at the age to be entered for the examination are entering, whereas the economy and the jobs require people to have five subjects to enter the employment [world], or five subjects to enter the university. Most students are leaving school without five subjects and one of the growing trends is the number of people who actually write subjects and get back no subjects at all. What happens at the end of that? What will be the future for them? So some of those issues came up and we have to try [to find] solutions to them.”
His comments came while addressing Friday’s press conference held at the Hilton Barbados Resort. It was at this venue that the 48th Meeting of the Caribbean Examinations Council was held during the past week.
Speaking about the decline in the number of students opting to do history, Cumberbatch said, “Although we are in the Caribbean and we need to know more about our culture and history of where we came from and so forth, the numbers are not up to scratch.”
Unable to give a reason for this, he added a decision was made at the Meeting for a special committee to be formed to look at the issue.
“We have no answers for it and the Meeting agreed to set up a task force which will include professors from the Universities of the West Indies, include persons from the Ministries of Education and the University of Guyana and other scholars or persons with an interest, to delve a little bit more into the phenomena to see exactly what is happening.” (MG)＀